*this comes from a chapter about parents*

Parents- I’m going to be straight up with you. Most teachers don’t want to say this to you, but I will. I want you to know this isn’t coming from a place of animosity or anger. The majority of my experiences with parents have been positive. Even those parents, though, sometimes need to hear what I’m about to say.
I am the professional here. This is my job. I’ve been well trained. I do it for a living. You need to trust me. I don’t get paid based on your child’s grades (yet). I don’t get sick pleasure out of making your son cry. I’m not picking on your daughter via her report card. I’m not trying to ruin your weekend with my math homework. I really do believe the reading is more important than football practice. I could use help on this field trip, and your daughter would really dig it if you came. Yes, he does need all those folders and pencils and journals, they aren’t that expensive at Target and you should see his desk without them. I really do know what is best in my classroom. The story your son is telling you about what happened at recess might be true-ish, I’m not saying he’s lying, but he might be conveniently forgetting context. I would very much appreciate it if you ask me my version of something before you get angry with me. I write notes home so you know what is going on, please write me back so I know you saw the note. And please please please don’t call my classroom in the middle of the day. I’m busy.
Posted by The Weird Teacher at 1:37 AM 2 comments: 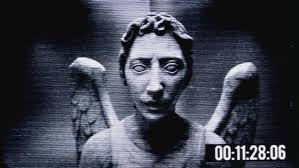 
Watching You- Watching You isn’t a game and it isn’t a lesson. It’s not active at all. The point of watching you is to constantly remind my students and myself that learning is serious business, but it doesn’t have to be taken seriously. It is easy to explain. I know I stole it, but I don’t know who from.
Before the school year starts I take a picture of myself looking stern, arms crossed, scowling at the camera. I print five full-page copies of the picture, which I put into clear protective covers. Then I staple the pictures to the walls of my classroom, one on each wall and one on the ceiling.
I say nothing about the pictures. I do not acknowledge them in any way until a student does. This doesn’t take long. The one in the front of the classroom doesn’t get noticed first because it’s normally hidden behind the pull-down screen. It’ll be one to the sides first seen. I hear it discovered. “What the..hey! There’s a picture of Mr. Robertson over here!” Eyes immediately go to the picture, then to the opposite wall, where they find the other. “Hey! He’s over here too!” Quickly they look to the back of the room and see me staring down at them. “He’s got pictures all over the place!” They think discoveries are over now. Where else would a picture be? When I roll up the screen to reveal number four it gets a delighted scream from the class. “Why do you have pictures of yourself all over the room?”
“Because I’m always watching you.”
It isn’t until later that someone finds the one on the ceiling. That’s the best one. The child is becoming bored with class. He lets his head loll back. What in the what? “He’s on the ceiling!”
It’s great. It works all year as parents and other classes come to my room for various reasons. Keeps me amused. It’s funny to listen to the kids share it with siblings outside of class. “He’s got pictures of himself all over! I know, it’s weird, right?”
Posted by The Weird Teacher at 1:40 PM No comments: