Solve The Math Problem In Another Way


My district just adopted a new math curriculum. Everyone on the selection committee loved it. None of the other choices even came close. If the curriculum choices were the NBA, the one we adopted was the Golden State Warriors. It had a strong focus on process rather than repetition, it had a cool online component, all the pieces worked together well, and it could shoot threes from anywhere.

I've been using it for the last few months. I've had two or three multi-hour training sessions on it led by trainers who are very excited by their product and seems to be among the fully converted.

It's pretty good. The focus on understanding the Why of math rather than repeating steps over and over really turns me on to it. What makes that hard is we're doing a ton of, "Solve this another way" in class now, and they aren't really used to that. The first time you hit kids with this they do the quizzical dog head-tilt. "Why? 12 + 15 = 27. Why do I have to do (10 + 10) + (2 + 5)?" "Because," I explain patiently. "The first way shows you can repeat steps back to me, like parrots. The math works because it works. Because magic. The second way shows you understand what the numbers actually are. It's not really one plus one because that's not a one in 12, it's a ten. Place value matters." At the end of that most of my kids looked at me like Nigel Tuffnel looking at Marty DiBergi when he asks why they can't just make ten louder. It takes time. They're coming along.

Because of things like this the book reads like the team that wrote it had a giant sign that read "RIGOR" hanging in the office where they were working, and every time they got caught up on a lesson they looked to the sign, put their hands over their hearts, closed their eyes, visualized success, and got back to work with renewed vigor. The book is real hard. Excuse me, the text. You see, the book is like a mix of text book and work book, where there's some instruction, but there's also problems (but not a whole ton, just five or ten real dense ones). When we called it a workbook in a session the smiling trainer corrected us, "We call them worktexts." K, whatever you say Susan. I can play the Teacher Euphemism game too, and this session was very static and direct.

The book (text) doesn't work great for most of my team or our students. So we're changing it. We're not ditching it, the district spent a lot of money on this. I'm not tossing a tool away, I'm just going to break it and use the pieces to accomplish my goals. Some of the questions are good. I'll take that and that and this, thank you very much.

The same goes for the direct instruction portion of the curriculum. As a show of good faith, because it's new, and because teachers I respect said that it's good, I've been trying to follow the instructional section, with its slides and not-script as closely as I can while still being responsive to my kids. But it's awfully teacher talky. So I'm breaking that too. The slides, for the most part, are good. It's certainly easier than writing all my own questions. The processes the program wants us to teach are things I agree the kids should know, and I don't mind the broad strokes ways it wants those processes taught. Again, I'm not going to round file a tool. I'm gonna strip it for parts to build my own Greased Lightning. *arm movement*

We're still working on perfecting instruction using the online component. The Machine is making all the decisions about what my students will do next on its own based on its own diagnostic, and I'm not a fan of that. Yes, it's using the data to make informed choices. The kid took the diagnostic, holes were registered in division, so the student will be given division lessons. But I'm not terribly comfortable with an instructional algorithm that seems like the distant cousin of the Amazon one that says, "I see you bought BABY DRIVER, would you like to also buy the soundtrack on vinyl?" (side note- BABY DRIVER is amazing and so is the soundtrack. Still, just because HAL is right doesn't make it not a little creepy.) I'll get under the hood eventually, once I have time *stops to laugh for ten minutes*, and when I do I'll be able to rebuild how it works into our classroom for the better.

That's three different pieces of just one of the many subjects I teach that I'm working on fixing to it is a better whole for my students. The process is slow but steady. We've even been told that we can do it. My district is currently embracing the Curriculum Is a Tool Not a Bible theory of leadership. I admit I'm lucky. There are schools out there, I've worked at them, where the district says Thou Shalt Teach With Fidelity, it's laaaaaame, and you do. Or you do while getting away with as much modification as you can. It sucks, even though becoming part of The Resistance and dancing closer and closer to the line can be a self-destructive kind of fun.

There are always ways to make something that isn't great work for your students. Sometimes you have to turn it over, upside down, inside out, and break it into smaller chunks, but there's a tool there. There's something that will reach someone somehow. One of the joys of teaching is solving problems multiple ways, because if there's one thing our students need, it's lots of ways to do things.

Posted by The Weird Teacher at 11:21 PM No comments:

Tonight we're playing EduMadLibs. Assuming I set this thing up right, after you fill out the Form you should get an email which contains a link to the your completed MadLib. Much thanks to Shawn Beard for his YouTube tutorial on how to do this. I think I'm gonna use this in class.

Posted by The Weird Teacher at 11:46 PM No comments:

The Words We Use (OR Wherein I Get Pedantic)

A picture can be worth a thousand words, but unless your name is Nick Cave, Neil Gaiman, or Octavia Butler you don't speak in pictures. We teachers need to be more aware of the words we use and the context hidden within them.

There are dozens of examples of this, but I'm going to focus on one. One example that gets under my skin every time I hear it or read it. One way that we talk about our classrooms that we should be better than. 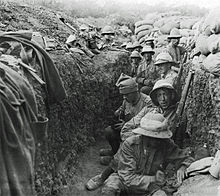 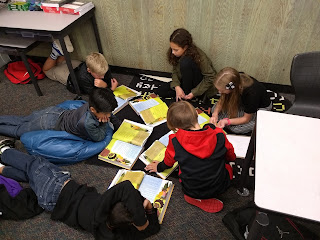 I know what we mean when we describe our work as "the trenches". Teaching is hard. It's exhausting. It often feels like a battle. Not in our classrooms, but from the outside. I haven't yet experienced a year where public education didn't feel like it was under attack from somewhere, be it a district or governor fighting against a fair contract, or an Education Secretary who's stated goals are contrary to public education. These external forces can push us into a battlefield mindset.

That doesn't translate when we talk about teaching using battlefield language, however. Non-educators don't think about all those external forces when they think about teaching. They think about us in a room with kids. Period. When we say we're in the trenches, whether we mean to or not, we're putting this image of a classroom into the world: 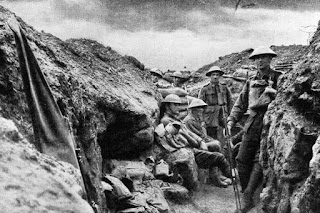 This is not a place of joyful learning. This is not where someone wants to be, wants their children to be. This is a hellscape. This is where the young of a country go to be destroyed. These are trenches.

Words matter. Words should be chosen with care. I may have dozens of mini-education crusades, but this one comes up every time I'm allowed to speak to a group of teachers. If I do nothing else for the profession, I hope to eradicate the use of "trenches" to describe anything even adjacent to education.

Classrooms are places of joy, love, and a fantastic madness. The word should call to mind images of rock and roll unicorns prancing on rainbows. Colorful, bright, and still a little confusing. Or whatever imagery best describes your ideal classroom. Find the language to express that. Please. 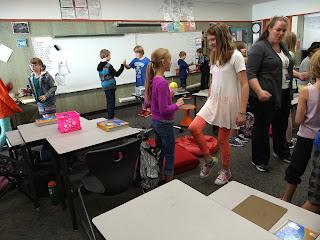