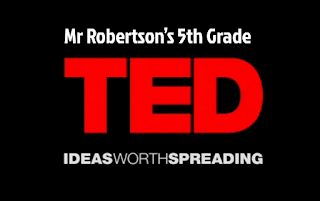 "I'm going to talk to you about neuroscience."

We've done plenty of public speaking. They have memorized and recited poems and shared Things about the books they've read. But TEDtalks are different. I'm not one of the converted, you see. I've seen TEDtalks that were inspiring and interesting, and I've seen others that, boy you worked hard on that didn't you? Well done. How much did it cost to be in the audience for that? Wow.

My school is hosting our first MakerFaire on May 26 and as part of the whole shebang we, (Michael Stephens and I, mostly him for this part) decided that having student TEDtalks running during the faire would be pretty awesome. I had to agree. Along with all of the Maker madness happening everywhere, students of every grade level giving short, passion-based talks is exactly the kind of self-motivated action we want to highlight.

I don't know how other teachers did it, but that meant my next Big Assignment was for each student to create a TEDtalk.

I explained it thusly- "You are going to give a TEDtalk. Put your hands down. I'll explain. A TEDtalk for us is- I said put your hand down, I'm explaining right now- a TEDtalk is for us a prepared speech where you will- seriously? Oh, yes, go to the bathroom. Sorry. Uh, anyway, you're going to talk for about five minutes. About what, you might be thinking. That, my friends, is 100% up to you. I want you to pick something you know a lot about and want to know more about. I want you to pick something you know nothing about but want to learn about. I want you to let your passion guide your learning and become an expert on a topic of your choosing! Now we're going to watch a couple of TEDtalks so you have an idea of what I'm looking for."

We watched a few videos and I let them discuss questions that had popped into their brains. No, I'd rather you not use slides. It's not a TEDshow or a TEDread, it's a TEDtalk. If you do use slides (yes, I backslid almost immediately), they need to be very very VERY simple. No text. One or two images. This is not a slideshow presentation. Yes, I'd like you to be memorized (this is why I backslid on the slides thing. I realized slides will help them remember what they are supposed to say and I'd rather that safety net exist). You shouldn't bring a script up with you. I'm going to give you a TON of time to work so you need to take advantage of it. No, you can't work in groups, I want you to work alone. (I took this back too because I had a small number of students who came up with the same or similar ideas and I thought it would increase the quality of their work. Two brains and all that.)

Then I pretty much let them get to work. I've been doing a lot of Get Out Of the Way teaching this year and I'm happy, mostly, with how it's turned out. But I'm also finding, and this project made that ever more clear, that some students do not thrive under a teacher who steps out of the way so they can, "Follow Their Passion." It's not that simple.

Therein lies the first of my problems. Some kids simply chose bad topics. I told them to choose what they were interested in. Yes, one kid chose neuroscience and another choose art and another chose coding. But some picked Kyree Irving and Call of Duty: Black Ops. Does it make me a hypocrite to look at their choice and veto it? I don't think so, because at the end of the day it's my goal and if I think they won't fulfill the goal with their chosen topic I'll course correct for them. I'm not pulling them by the nose to the learning but I'll waft them back on track. There's a reason I'm in the room getting paid the big bucks.

I tried to split the difference. I had specific conversations with students. "Ok, you want to do this basketball player? Fine, but I don't want a bio. I want what you learned from watching him. What you learned from learning about him. Why should we listen to you talk about this guy and what can we take away from it?" That was my advice and guidance. Choose your path but you better be able to educationally justify your choice. It kinda worked. But again, wafting not yanking.

I'm not saying my kids aren't creative. They are. But choose your own topic is too wide a leap for some fifth graders. What are they interested in? What do they want to know more about? That's tough. Try to think back to when you were eleven. Did you have a ton of interests? I'm not sure I did. My TEDtalk, had I been in my class, probably would have been about Star Trek. And it would have bored everyone to tears. It's also tough to get them to the kinds of deeper diving we expect when we assign these types of things. I encouraged and guided and made them write draft after draft and practice practice practice. Say it out loud, you'll hear problems. Say it to your friends, they'll give constructive advice. Well, some will. That's a different skill that we've done but not taught in depth. Because time.

They were ok. Not as great as I wanted, not as practiced as I felt like I'd seen. Few were as deep as I had directed. One of their biggest hurdles, and this is where I think I failed the hardest in explaining the project, was too many didn't seek deeper learning. Too many chose a topic they knew about or were interested in, but didn't dive. Because that's also a whole other skill.

I sat in the back and watched too many get right up to the edge of a good idea and then skate away from it. It's less that they were being lazy and more that they didn't realize the heavier weight could be lifted, or was even there to be lifted. After so many I said something along the lines of, "That one slide that you had about making the dress? And how you said you tried to make it and failed? THAT'S your TEDtalk! Just that. Or the slide about how fashion has evolved over time- THAT is a TEDtalk. Dig into that!" The great teachers out there reading this are thinking, "Dude, you're the teacher. Why didn't you tell her that earlier?" My sole excuse is I have 31 kids and only so much time. I talked to them about their talks, we met, they explained, I gave advice and guidance, I sent them away to work, and I mixed and mingled as they worked. But I didn't want my hands all over their work. Another fine line of teaching. Still some slipped past me, as you'll note if you watch the videos in the playlist below. Some are straight up embarrassing. For the kid and for me.

I'm being hard on myself and my class because I wanted them to do better. The project, with a few exemptions, never clicked in the deeper way I was hoping for. I'm in the process  of modeling this reflection out loud with them- explaining and talking and telling them what I saw and what I expected and what could have been done better. I'm leaving an open invitation to try again.

Some were so close to good. There's a few who chose to work without a slideshow, which I was tickled by. That's an even bigger risk. But, the best one without a slideshow was about art, which is literally the one topic that absolutely needs some slides. "You talked about Picasso, but didn't show us Picasso!"

Passion-based learning is hard because students first need to find their passion. They need to dig and unpack those passions. It's not a magic bullet that fixes all of education's woes. Is it better that, "All of you will now write a presentation on Lewis and Clarke." Yeah, but watching paint dry on growing grass while listening to Nickleback is more interesting than that.

Some TEDtalks were great and those that get picked for the MakerFaire will be further revised and polished until they shine. All the students will be watching the videos of their TEDtalks and writing reflections, which will include, "I learned x in the process of creating this." Hopefully the reflections and gentle nudging will result in more revising and the taking of another swing. So far only one student has tried again and I think her second attempt was actually worse. She over-corrected. A few still haven't gone for a variety of reasons, and I've been in front of the class explicitly hoping they take lessons from what they've seen and heard. (Update- One has! He's going in the next day or two and his talk is about sneakers. We conferenced about what he could do with that and I suggested he leap from talking about how much they cost to what it costs to make them, maybe he'd find something interesting. Twenty minutes later he came up to me with his phone open to a pie chart and excitedly explained all the percentages of profit and shipping and materials. He said he was learning a lot. Was I hoping he'd get to sweatshops? Yes. Am I happy he got to any deeper understanding of economics? Way bigger yes.)


It was also totally not fair to some of the others to start with the neuroscience talk, but he volunteered. Following it with the kid who wanted to talk about why being weird is awesome was a strong opening one-two.

Doing TEDtalks is a great idea. Having students choose their own topics, become experts, speak with stories and depth on a subject they care about- that's awesome. But it's also a lot harder than it sounds.

*note that there are two of every talk because I was filming with two iPads in case one failed and I uploaded all the videos into one playlist. If having doubles makes you grumpy I'd be happy to let you watch my class or plan my next day while I edited. Also, yes I have permission to post the videos.
Posted by The Weird Teacher at 5:06 PM 9 comments: