Find a Hobby, You Kids! 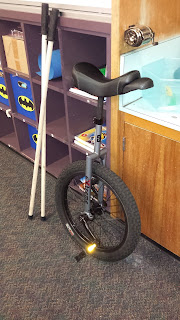 Did I get all the buzzwords out of the way? We'll see.

A few weeks ago I made my students learn a new hobby.*

That's it, that was the assignment. Learn a new hobby, something you've never done before. Something that sounds interesting. Something you've wanted to learn maybe. Anything that tickles your fancy. You have three weeks to get as good at it as you can get. You must journal the process you take daily- how are you feeling, what did you do, that kind of thing. And, at the end of three weeks, you must stand in front of the class and demonstrate what you've learned.

I made it very clear that I did not expect them to be experts at their hobby. No one gets to be an expert in three weeks. In fact, that was one of the major lessons I wanted them to take away from the project (this I didn't tell them until the end). I wanted them to realize what the learning process is on their own terms. I wanted them to choose something, be excited about it, and let that excitement carry them through those first few days of failure to that first breakthrough.

I made the definition of hobby as broad as I could. I wanted it to be something they did with their hands. Writing a book, while a hobby, isn't what I had in mind. Juggling, sewing, knitting, ventriloquism, these are hobbies that were suggested. But if the student had another idea and it fit in the basic outline I'd created I let them go at it. As long as they journaled progress and had something to show for it at the end.

I went into this project with some trepidation. You never know what kids will bring back. I compressed the time scale as much as I dared, and I gave no time in class to practice. "But Doug," you gasp. "That means you gave *glances around nervously and whispers* homework!" I did, reader stand-in! I did assign homework! In that I assigned work to be completed at home. Because how else is this project going to get done? It's about learning on their own. It's about learning about learning. It's about freedom and passion. So it has to be homework. Was I sure what it would net me? No. But that doesn't often stop me. Sometimes your castle has to burn down, fall over, then sink into the swamp. Then you build another one. I was prepared to build another one.

I did constant check-ins. Kids reported what their hobby was every few days. Many changed hobbies mid-stream. Is this in the spirit of what I intended? Not really. But Passion-Based means sometimes Passion Changes. Fine, "But you're presenting on this day," I'd say. "Be ready." And nearly all were. Only one didn't bring in anything, still hasn't. Mom and dad say he's got something, but no amount of coaxing or flexibility has gotten him to demonstrate it to me or anyone else, so that's an open case. The rest? For the most part they KILLED it.

I had kids bring in sewing projects like you wouldn't believe.

Many talents were on display as well. I use puppets in my class, as many of you know. I don't make the first effort to throw my voice. I rely on Courson and Sophie being funny and engaging enough that the kids forgive my moving mouth, and it works just fine. But having a teacher who uses puppets inspired a few kids to get their own and try to learn the sacred art of ventriloquism. And they really tried. Watch the videos. No one is as good as the famous racist guy from Comedy Central, but they all came up with bits and personalities for their puppets.

I had a few jugglers**. Another really tough skill, made tougher by the choices some of the kids made. I swear the girl didn't tell me she was going to try to juggle Barbies because, "balls seemed too easy." I would have dissuaded her of that. They all got to two. Not great two, but two. And the class was super impressed by two.

One of my boys decided to learn to ride a unicycle because someone in his family rides one and said he would teach him. Unicycle is freaking hard. And doing it in front of your classmates? Yeah. I also had a few kids learn some ASL. This I stopped the class for. "This is a hobby, but it's also a skill that will have a real impact on your futures if you pursue it. Sewing, the other skills, they are great and I love it. But ASL is learning another language. Colleges, job, they'll love this. Follow-up with this."

But my favorite hobbies, I must admit, were my fledgling magicians. My dad is a magician. I love magic. I was thrilled some kids decided to pick it. And yes, I realize that I basically turned my class into Mr Robertson's Traveling Circus- Come see the jugglers, magicians, unicyclist, gymnasts (had two girls who learned gymnastic tricks), ventriloquists, and more! And the magicians are where the power of the project landed most strongly for me.

Dacian, and I use his name because I'm going to link to the video directly, is one of my more talkative kids. The teachers reading this can decode that sentence all they want. He's hard to motivate and focus. I was not sure what I'd get from him. I wasn't sure I'd get anything. I got this. I strongly suggest you watch all of it before reading on.


That's one of the best up close card tricks I've ever seen. I have no idea how he did it. I've watched this video a bunch of times. I'm delighted every time. That sound in my voice at the end? 100% real joy.

This kid went from one of those kids to his classmate to a superstar. He's freaking Harry Potter now. I sent him to other classes to perform. I tried to send him to the office to show off, but he wasn't keen on that. "Come on, dude. This is a good trip up there." Nope. I sent the video instead.

But now I know what he's capable of. What they're all capable of. In a concrete way they enjoyed. They've shown what some freedom within guidelines will birth. I love this project and I think it'll be part of my classroom for many years to come. They journaled, they practiced, they had choice, they learned, they learned about learning, and they walked away from it slightly better than they were coming into it. In a few weeks and months I'm going to follow-up and ask who is still doing their hobbies. I think, I hope, many will say they are.

Let your kids surprise you.

*here is the Doc the kids got. I put the link at the bottom so you'd read what I had to say first.

**all the video links just go to the playlist
Posted by The Weird Teacher at 11:01 PM