Song of Joy- Teaching Students to Love What They Love 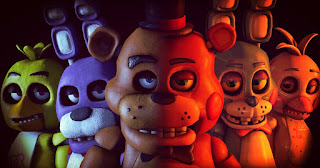 Last year I had a student who was obsessed with the video game Five Nights At Freddy's. Obsessed like only children and nerds can get obsessed. She had a Five Nights at Freddy's (hereby called FNAF because holy crap what a long title) backpack, a different FNAF shirt for every day, FNAF lunchbox, FNAF folders, a FNAF journal, her ID was on a FNAF lanyard. When she was given the choice to freewrite there was always a character named Freddy or Foxy. When given the chance to draw something and then add personalized details there would be the freaky-looking mechanical bear face. When given the assignment to do a biography about anyone on Earth she choose the dude who created FNAF. If her optometrist had carried FNAF glasses she would have worn those. If she'd been over 18 she would have gotten a poorly advised tattoo of the FNAF logo on her shoulder blade.

Because I am an Old, I was unaware this game existed until she walked into my classroom. Once she was there, I knew all about it. Rarely does a student make it so easy to make a connection, so easy to find an In to talk about. So often you've got to do the flowchart. "Do you enjoy sports? If Yes- Which?/If No- Do you enjoy video games?" and so on. But seeing as this kid was branded like a Wayne's World bit, all I had to do was say, "Five Nights at Freddy's? What's that?"

Know how I immediately knew that she was a true nerdy fan and not just some kid who mentioned the game once so her mom bought her the shirt? She didn't roll her eyes at me like I was an Old. Instead her eyes lit up as if to say, "Ah! An Uninitiated! Come with me on this journey, young padawan. I will show you things you have never imagined." A true nerd will never make you feel bad for not knowing about the thing they love. They're too excited about helping you to See The Light.

My class that year was good. Every year my class is good. But it was also challenging. They weren't rude kids, but, being fifth graders, teasing was becoming a Tool of Communication. A blunt object still, not honed or practiced, and lacking the know-how of When, Where, and Who. So it became easy for the other students who were looking for a cheap laugh to drop little barbs at her. "Again with the Five Nights at Freddy's story? Really?" While she registered these barbs, she never let them decrease her love of the game.

Naturally, I didn't let this go on. But you can't, as a teacher, just step in and say, "Hey! Be nice!" That doesn't work.* Specificity matters. Reasons matter. So instead I chose to talk to my class about joy.

"I hope that you find something that you love as much as she loves this video game. How cool is it that she gets so much joy out of this thing? It's not our place to steal victimless joy from others. We should rejoice in it." I shared my own story about growing up loving everything Star Trek. When the other kids at school were talking about the Sunday football scores I'd be saying, "Yeah yeah, great. But did you see how Data and Geordi had to reconfigure the primary power coupling because the Romulans decloaked out of nowhere and then Captain Picard did that thing where he diplomatically threatened them into submission and they ran away because that's what Romulans always do? What was your favorite part?" Then my students look at me in a way that I've been looked at many times before and will be many times again, and I smile. One kid might venture, "Star Wars is better than Star Trek." That student, by the way, is allowed to be wrong. We celebrate mistakes in our classroom. But it opens the gate to the conversation again. Why would you say that? Just to be funny? But at what expense?

School is about so much more than the lessons. We know that. The lesson are important, the kids need the curriculum as in their heads as it can get, Google or not. But school is also about creating wonderful, productive citizens of a loving world. That starts here, with helping kids be cool with their peers being into things they don't understand. That's a foundation of understanding and empathy we can build on. The new Star Wars movies, among other franchises, have been attacked by misguided people who miss the point of science fiction because they have women and people of color at the lead rather than yet another Chosen White Guy. Changing that poisonous attitude starts in our classrooms, teaching students that acceptance of what others love leads to acceptance of what others are and seeing others as real people. It will help prevent our kids from becoming awful people online or in person (I don't say 'in real life' because we need to stop pretending the internet isn't real life). Acceptance matters, and it's our job to reinforce that at every turn.

I have four rules in my classroom- Be Safe, Be Responsible, Be Respectful, Make Good Choices. That's still too many, so I sum them all up under one Umbrella Rule- Be Cool. I don't get my former student's love for Five Nights at Freddy's. I've looked into the game and it's way not for me. But it doesn't need to be. I'm not going to tease her for it. That wouldn't be cool.

School is a place for joy. Joyful learning, but also learning to be joyful. Joyful in that way that only the most dedicated fan can be. And cool to everyone, whether they love it too or not.

*unless you're a parent with more than one child, then "Hey! Be nice!" becomes part of your regular vocabulary.

Posted by The Weird Teacher at 5:19 PM