The Eyebrows OR I'm A Better Teacher Because of You 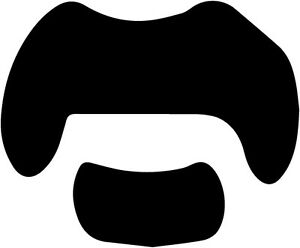 "I'm a better teacher because I teach across the hall from you."

This is what I said to a teacher I work with last week. His class of fifth graders, forty* fifth graders, had just finished putting on a stellar Performing Arts Showcase (aka- a school talent show). His kids did everything themselves. He put it completely on their adolescent shoulders. The auditions, the planning, the scheduling, the lighting, every single thing needed to be done by the kids. He would supervise and project manage overall, he is the teacher, but it's for the kids to do.

And they did amazingly.

Here's the thing- the talent on display was no better or worse than it had been any other year. Lots of budding singers, a dancer or two, a bunch of jump ropers because that's big at our school, a kid who solved a Rubic's Cube live on stage in about a minute, a gymnast, and a piano player. I probably missed a few acts, but you get the idea. On its own it was a completely unremarkable talent show, excuse me, Performing Arts Showcase.

But this teacher cannot leave well enough alone. He has than internal drive to look at everything and think, "Ok, but how can this be better? Cooler? More professional?" So he found out that our school's stage not only has a high quality lighting rig, but the control box isn't terrible complicated. He grabbed a few volunteers who made it their mission every Wednesday morning for two months to come in early and learn the lighting system, and then build lighting cues for the entire show. He went on Donor's Choose and bought three clip-on lav mics for the hosts and one singer to wear, because you and I know that when children hold microphones we hear only every third word. Hands-free is always better. So the hosts had the mics- yes he had hosts who had bits written and rehearsed with specific comments relating to our Lifeskills (flexible, initiative, integrity, etc) for each and every act- but, because that's not enough when you've got one leftover mic. So for one of the singing acts he had the kid sit with his class instead of wait backstage, and when he got introduced the kid clicked on his mic started singing from his seat, slowly walking to the stage. Freaking dramatic, going that extra step. He also realized that we had UV lights and put that to his kids, and what they landed on was the final act of the performance featuring two of his kids roller blading around the auditorium while a bunch of others danced on stage, and then they hit the lights and everyone lit up in that cool blacklight green.

That whole long previous paragraph doesn't even mention that he assigned kids to be ushers, leading parents to specified seats and, and I freaking loved this, holding classes and students at the door if an act was on stage performing, not letting them in until the act was done. Or how he printed special Backstage Passes and handed them out to a few classes to give to deserving students so they could watch it from the back. Which is a brilliant freaking idea because my fourth graders are the ones who will be doing this show next year, so they got to see how it worked. They came back blown away.

This whole time the teacher stood near the back, headphones on to be in communication with his stage managers in the back. But the kids were doing it. It was there show. Fifth graders. When I asked him about some of the moving pieces he admitted that some of the best ideas came from necessity. He's got forty kids, so how do you keep all those kids busy? You find jobs. And those job make the show better.

This is the same teacher who put on a play a few weeks ago, and a few years ago worked with me to build our MakerSpace and our first MakerFaire.

"You make me a better teacher," I told him. I'm naturally an above and beyond person. I love looking for ways to make a thing go bigger louder faster cooler more more more. I'll do that whether anyone else cares or not. But having him there, right across the hall, helps me to see those places where the eyebrows need to go.

About the "the eyebrows" thing- When Frank Zappa would write songs with his band they would always get to a point where the song was good. It was pretty, it was complicated, it met with everyone's approval. Except Frank's. It was then that Frank would push his band to "put the eyebrows on it." What will make this song special? What makes it different, better, pushes it to eleven? Because I love Frank and I'm constantly inspired by him, I've adopted the phrase. It says it exactly right.

Tomorrow (today is Monday, 5/20/19) my school is putting up our fifth MakerFaire. We've rebranded it to Powell Valley Makes: Cardboard City, however. The idea is that families will come in with their students and grab a pre-made cardboard house (made by the students and buddy classes), and then travel to five places on campus representing STEAM- a Science Room, a Technology Room, and Engineering Room, an Art Room, and a Mathematics Room. In each room their will add to and improve their homes. Parents and students will work together to use STEAM to learn. Then the completed houses will go to the gym stage, where a giant map has been laid out. At the end of the night, in theory, we'll have a giant tiny cardboard city built by our families.

I put the eyebrows on stuff in my classroom all the time, but I'm in charge of the Powell Valley Makes, so I've gone ahead and really dug in here. So first we needed a promotional video to explain the concept to the students, to put on the Facebook page, and to show the night of to keep the explanation going. That's a lot of jobs for one video. I could have made a shoot-and-talk and gotten the job done, but what fun is that? Instead I made this-


That took a long freaking time. I did it alone. But look at how cool it is!

Then one of the other teachers working with me, who has also done hours and hours of work, casually mentioned that our city needed a Welcome sign. Of course it does! So I made two, one for the map and one for the front entrance. One one would have cared if they were just big signs, but that's not what city signs look like. 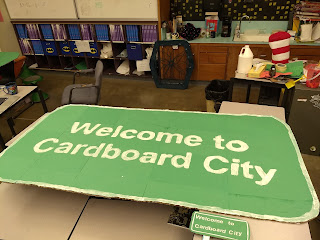 And I also needed to make the map. Now, no would knows what to expect, we've never done this before. This map could be anything. It could be as simple as possible. But what fun is that? It needs two water features (maybe someone will build a bridge!), and a bunch of different type of road layouts. What's our city going to look like? That's up to the kids. I'd put my home near the river, flood danger be damned. 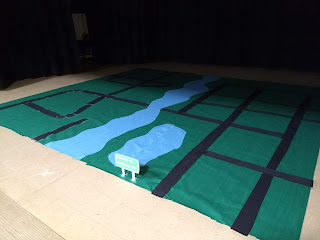 (Yes, the sound in the background is an interview with a bunch of Zappa's old drummers. No, I didn't plan it that way, it's just a real good interview.)

I can't wait to update this blog with pictures and a video of what it looks like when it's done and fully lit tomorrow. Was this a lot of work? Of course. So much extra work. But it's gotta be done. That other teacher would do this, and probably other things I haven't thought of. He dropped the idea on me today that we should have "busy city sounds" softly playing over the PA on the night, which is a freaking brilliant addition.

I didn't do this just because he makes me better. I would have done this anyway because it's who I am. But I made that big giant sign look like that because I know he'd have, and it would be sweet. I also go this big for the few (very few) teachers at my school who can't, or their kids can't, when really they can I know it because specific reasons that aren't fair to blog about. I'll admit to living with a perpetual extended middle finger about a lot of things. Sometimes- not always, it's not healthy, but sometimes- you gotta do something because screw you I'll show you how cool this can be. Spite ain't the best fuel, it doesn't burn long, but it can be a great launch mix.

I hope my students look at what they are going to accomplish tomorrow and note the eyebrows everywhere. It's something they hear from me all the time (Frank's picture and a quote is the header image of both our class website and our Google Classroom). Model what you want to see from your kids. Model what you hope to see from your staff. And find someone who inspires your eyebrows.

If you like this post and the other posts on this blog you should know I’ve written three books about teaching- He’s the Weird Teacher, THE Teaching Text (You’re Welcome), and A Classroom Of One. I’ve also written one novel- The Unforgiving Road. You should check them out, I’m even better in long form. I’m also on the tweets @TheWeirdTeacher.
Posted by The Weird Teacher at 10:03 PM