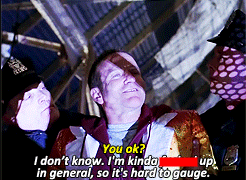 Let's get a little personal with mental health, why don't we? This will, of course, tie into teaching, but that's not really the point either.

For a while now I've been suffering from pretty extreme bouts of anxiety. I didn't always recognize these as such, however. Let's go back- When my first child was born I found out that Paternal Postnatal Depression is a thing. I knew that women could experience something like this, and we were on the look out for that. Had no idea it could happen to me too. I'm the Dad, I didn't carry nothing. Nope, knocked me flat, and for a while. I ended up going on medication and doing talk therapy for a while to help me through it. It also made me hesitate about going for Weirdlings Two and Three because I was worried that it would come back. My wife is incredible and we got through it together and it didn't come back with either of the other two.

Looking back, I've had anxiety in some form or another for as long as I can remember. I always chalked it up to being a control freak. If you, dear reader, and I go for a drive, I will insist on driving. Even if we're friends. Even if I trust you. I'm a bad passenger. Control freak, right? Seems like it. Especially since this feeling never happens to me on my motorcycle. Then I'm really the only person in charge. I can't even hear you if you're riding with me.

If we're stuck in traffic I'm going to start freaking out, feeling trapped. Because I literally am. I'm trapped in this car in the middle lane surrounded by all these other cars and what if I need to get out I can't no one is moving so I can't move we're just stuck here and why won't anyone move. Driving makes this better, but not all the way because I'm not in control of the situation.

Airplanes are worse. I hate flying. No, not true. I hate boarding the plane, being stuck in the aisle, getting to my seat, not being able to get up from the time when they button up the big door until we're at cruising altitude. You can't get up at any point during that! You're stuck in your seat no matter what. What if your stomach gets upset (a related problem we'll get to)? Too bad. Stay there and suffer until we tell you you can stand up. And then we're in the air and I'm fine. Until..."Passengers need to return to their seats and prepare for landing." And then it's another twenty minutes/eternity until we're at the gate. The entire time I have my eyes closed and I'm mentally repeating, "I'm ok, I'm alright." over and over. No exaggeration, no joke. I hate it and I'm miserable every time.

I thought I was just a bad traveler.

On top of that I've always had stomach issues. Issues that we've mostly fixed with a change in diet, turns out I'm lactose and gluten intolerant. Good to know. That helps but didn't actually fix things because now I've trained my body that when I'm stressed my stomach hurts, but when my stomach hurts it stresses me out. So soon I'm stressed that I'll be in a situation that will stress me out and upset my stomach, which sets my stomach off.

But recently things have accelerated and gotten worse and worse. Examples, because it's important to me you, dear reader, know what I mean. To be clear, these are the most illustrative examples, certainly not the only ones-

A while ago a friend of mine and I went to see Nick Cave, one of my most favorite musicians on Earth. Because of a trick of the tickets we ended up in the second row. He was right there. He could see us. We could see him. We were supposed to be in the back, where the cheap seats were. Being that close was incredibly exciting, but also so very stressful. I was completely unable to fully relax and enjoy the show because the back of my mind had this flashing red light the whole time. He was great and I loved it and I still couldn't fully connect.

I went out on Black Friday, something I never ever do. But my local record store that I love was doing a Black Friday thing and they were going to have a limited number of the new Opeth album and the vinyl reissue of Geddy Lee's solo album "My Favorite Headache." Yes, I could buy these online but I love Jackpot Records and I want to support local business. I got there at nine for a ten o'clock opening because I knew there would be a line and damned if someone else would get my albums. I was fifth in line. Score. I was fine at 9:00. I was fine at 9:15. At about 9:30 I started having to talk myself into staying in line. At 9:45, after waiting forty-five minutes, needing only to wait fifteen more, I was actively pacing and eyeballing my car, which I could see from the line. I was having a detailed conversation with myself about, "I should just go home, I could get these online. It would be fine. I should just get in my car and go." Ten minutes to go, still pacing, it's getting worse. I'm miserable and my heart is pounding and I know all of this is stupid because I'm fifth in line. When they open I'll be right in there. I'm not worried about not getting the album. What am I worried about? I have no idea.

I've heard people who have panic attacks describe the mental spiral as "you keep thinking of worse and worse scenarios, which keeps escalating your panic." That's not what was happening to me. There was no "worse and worse scenario." There was no thinking involved. I just had to get out of there or I felt like I would be sick. Once again I'm whispering to myself, "I'm ok, I'm alright" over and over. I'm pissed that I want to leave and trying to use that anger to keep myself in line for five stupid minutes more. Finally they open the door. I go right in, find the two albums I wanted in about two minutes, pay, and I'm out of there. I enjoyed exactly none of the experience of being in a record store with a bunch of other music nerds who got up and waited in line to buy vinyl, something I really like.

This was the last straw. I made an appointment for the doctor. I described all of this to her and kept hedging, "I don't know if it's anxiety or of I'm a control freak or if it's just my stomach or what and I don't know." She stopped me. "Everything you are saying is textbook anxiety. That's exactly what this is."

Then she asked me a question I had already thought quite a bit about, because I am reflective and I had noticed this trend. She said, "You're a teacher. Does this happen to you at school?"

Why? I think it's because of the control thing. What do I have to be anxious about in my classroom? This is, more than just about anywhere else, my space. I mean, it's my students' space too, but I am its architect. That has to be the reason I'm basically anxiety-free in my room. Now, if you tell me I have to be trapped in a PD all day I'm gonna have some spikes. But if I'm running it? None. But if, during that PD, you ask me to go out to lunch with you, I'm going to drive. The second I'm out of the classroom it's back.

Which explains why I hate field trips so much. It's not just that the bus makes me motion sick after all. Maybe it doesn't, but the anxiety does. Either way, field trips suck.

I'm still trying to process what all this means. I'm doing what I can to get better. The doc recommended me to a talk therapy person and we're trying out medication to see if that will help. Hey, you know what's fun? Teaching the week before Winter break, but adjusting to new anti-anxiety medication at the same time! Now why does my stomach hurt? Is it stress? Side effects? Both? Weee!

I wonder if what I notice about my anxiety in relation to my classroom rings true for other teachers. I wrote this and shared all of this because it's important that we are real people. I know how I come across, hyper-confident-to-cocky, silly, irreverent. That's all me, but I bet some of it is coping mechanisms too. When I get anxious I either talk a whole lot or cannot talk at all. Some of you have probably met me at a conference and got a weird vibe. This might be why. Though, like I said, I'm mostly ok when I'm presenting. But in the halls of ISTE, surrounded by a billion people? Yeah, I don't like that at all. I spent the evenings of my last ISTE, the last one in San Antonio, in my hotel room watching Star Trek: The Next Generation. Because TNG is great, but also because it was just easier.

And let's not even get into how I think I've turned my phone into a coping mechanism. I'm sure that's SUPER healthy.

I don't know how to end this post. I'm tired of not being able to enjoy things like concerts and amusement parks and drives with my family and movies and going to dinner and trips to the record store. I'm tired of waiting for the stress to jump out and making choices that will just let me avoid it if I can. I've become such a homebody because it's just safer and easier. Maybe you can relate. Maybe knowing this about me helps you, dear reader? Hopefully the medication does its job, and if it doesn't hopefully it's not hard to find one that will. Hopefully you're all doing as well as you can out there. We're all in this together.

If you like this post and the other posts on this blog you should know I’ve written three books about teaching- He’s the Weird Teacher, THE Teaching Text (You’re Welcome), and A Classroom Of One. I’ve also written one novel- The Unforgiving Road. You should check them out, I’m even better in long form. I’m also on the tweets @TheWeirdTeacher.
Posted by The Weird Teacher at 11:01 PM