The History of Tetherball

**This goes in a chapter about recess games** 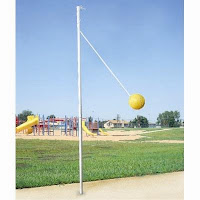 According to facts I’m making up as I go, tetherball was invented in ancient Macedonia over 400 years ago by villagers. They would take cabbages which had someone gone rotten and string them to free standing poles which were normally used to hold the cloth roofs over market stalls. Obviously, this would be done after the work day was over as a way to unwind. I realize you might think they would have used the heads of their enemies, or maybe sacrifices, but it only took a few broken knuckles to realize their error there. Cabbage was in high supply, durable, and soft enough not to hurt that much, unless one accidentally punched the small metal ring punched through the cabbage to hold it to the string. That, and this is a direct translation from the Ancient Tetherball Texts of Macedonia, “Hurt like the dickens.” Tetherball was lost to history when ancient Macedonia fell and might have stayed that way if not for the efforts of one archeologist by the name of Dr. Roland T. Tether. He was not the first one to discover the ruins of Macedonia, in fact he was one of the last. But his tardiness did yield a reward when he discovered the preserved hand bones of Macedonian children and he was able to x-ray them, discovering the unusual fracture pattern. He put this evidence together with the petrified cabbages his team found, which had of course been ignored by previous expeditions because really, who cares about petrified cabbages? From this evidence he was able to recreate the game using a leather bladder in the place of the cabbage, which was a much more sturdy and less destructible choice. He then taught the game to his children, who brought friends over to their home to play. Soon the game caught on across the neighborhood and the local school marm asked Dr. Tether to instal one of his devices at the schoolhouse as a way for children to develop their hand-eye coordination during break times. The rest, as they say, is tetherball history.
Posted by The Weird Teacher at 1:58 PM