The school year is coming to a close or has already closed for us all. Let's talk about the end by finishing each other's sentences.
This post is short because I'm writing it on my tablet in the Charlotte airport.
Posted by The Weird Teacher at 4:07 AM No comments:

Let's go for a trip.

Maybe some of us will be traveling this summer*. Maybe we'll be stuck at home wishing we are traveling.

We've done a chat about the world before so I'll mix it up this week and try not to repeat myself. I want tonight to be interactive. One of the things I've been trying to do with #WeirdEd is force more interaction between people. Too many chats claim to be #CONNECTEDEDUCATOR chats but it's really people popping in, answering the question, popping off to another chat, and not really talking. #WeirdEd is better than most at that but we can always be better. Questions that guide and encourage conversation while hopefully having a point and being enjoyable. That's all I'm going for every week.

Let's go on a trip with friends!

ALSO- because of low attendance I'm stopping #WeirdEdE, at least until summer or maybe the start of next year. #WeirdEd still happening at 7pst every Weds.

*My brain refuses to process that it's nearly summer break. It's not loading.
Posted by The Weird Teacher at 3:14 PM No comments:

I did a session at the 4T Virtual Con put on by the University of Michigan.

After doing a ton of work to be sure I was ready all my audio stuff refused to work and we had to do a work around where I called the woman controlling the room and she piped my phone call through her computer. Pretty much the least ideal situation in the world. That coupled with a few other tech problems made this this most stressful session ever. The 4T people were amazingly helpful and patient with my problems.

If you want to see my session, complete with pretty terrible audio click on this link and skip forward to about 28 minutes.
Posted by The Weird Teacher at 11:49 AM No comments: 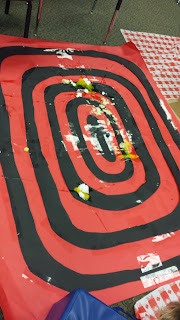 I've always wanted to do an Egg Drop project with a class, but had never done one.

This year has been a trying year for a lot of reasons.

These two things together meant I'm willing to try anything to keep them engaged. Like the desks. Like the cardboard arcade. So we did an Egg Drop. The class was about to crack otherwise. I was feeling hardboiled.

I made it very simple and made it a home project (link goes to the Doc the students got). That was my biggest concern. This class isn't as responsible as I'd like. They are, in fact, probably the least responsible group I've had in nine years of teaching. No yolk. Maybe this would help with that. So I went into it a little more pessimistic than I should have. I fully expected on the due date to have a bunch, at least five, "Uhh, I forgot." I scaffolded, I supported, I gave plenty of time (two and a half weeks), but you never know. I was walking on eggshells.

I'm happy to be wrong wrong wrong. My expectations were scrambled. Every single kid brought it something, 85% of the somethings looked like some-to-much time was spent on them. A few were down right eggcellent. And nearly everyone brought in the page about the project they were supposed to write.

At the end of the day Friday we tested our projects. My initial direction was that the egg needed to survive a fall of only three feet. Most projects easily surpassed that. It's possible I'm ending up on the roof Monday afternoon for Big Tests. I'm not sure my admin will be feeling sunny side up about it. We'll see.

As you'll see, my lack of specific direction resulted in some pretty creative contraptions, including three that changed the floor rather than protected the egg. Hey, I didn't say you couldn't do that. Thinking outside the carton was encouraged. It was fun to see what plans they hatched.

Here are some of the more creative projects. 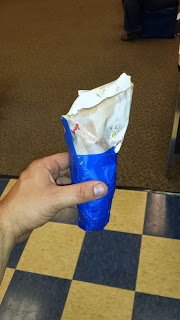 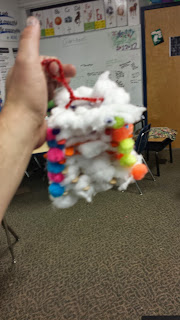 And now for a few that resulted in what scientists might call, "A learning opportunity result" 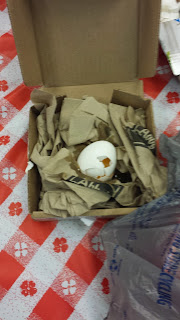 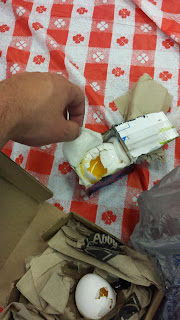 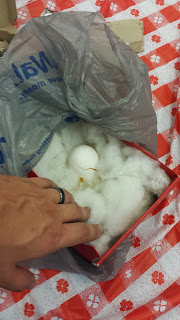 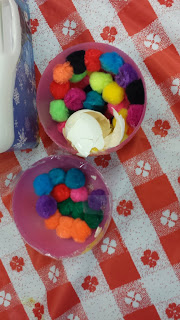 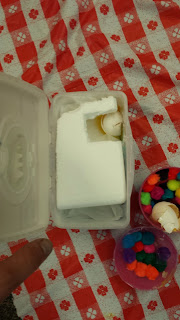 A student recorded the video, which is why sometimes the framing isn't ideal. Still, he did a good job. And I cut it into six pieces because that seemed easier than making you (and the parents who watch it) watch one 34 minute video.

Omelet you watch for yourself how clever my kids are.

Posted by The Weird Teacher at 9:55 PM No comments:

Avengers: Age of Ultron dropped last week and everyone but me has gotten to see it.

Correction: I got to see twenty minutes of it. You see, the older Weirdling is two and a half and has been to Captain America: Winter Soldier, Guardians of the Galaxy, and Big Hero Six in theaters. He was great through all of them. Some he slept through, but he was the perfect kid in the theater. I decided to take a risk and try and Dad/Son movie day last Friday to Ultron. He loves the Avengers, especially Captain America. I hoped that would be enough to keep his tiny eyes forward and entranced.

Not so much. Oh, it worked for the opening (amazing, wonderful) battle scene. Then he ran out of interest in popcorn and drink and the movie slowed down to let Joss write Joss stuff, which I love but the small person isn't so much interested in. So he started chirping. And getting antsy. And being that kid. Which meant that I was That Parent. I tried moving us all the way to the front, to the two empty rows directly before the screen. The ones you sit in when you literally want to see the movie first. Nope, those just gave him room to move around and say, "Daddy! Come get me!." Newp! Scooped him up and out we went. I tried. He couldn't handle it. No worries, he's two, I knew it was a risk. We got out before we ruined the movie for anyone. I'll see it this weekend when grandparents are in town.

ANYWAY, I haven't gotten to see Ultron which means this chat won't be spoiler-filled and if it is I'll travel to the home of the person who spoils anything and shave their dog and teach it to walk backwards.

#WeirdEd will hit each Avenger in some way mostly because that means I get to think deeply about each Avenger and try to connect him or her to education in some way, and then I get to make teachers answer questions about SMASH or being a billionaire, genius, playboy, philanthropist*.

*something we all know something about
Posted by The Weird Teacher at 3:25 PM No comments:

I am loath to paint an entire website with the same brush, but it seems to me that Buzzfeed and Buzzfeed-like websites have only one goal- to destroy literacy. Sometimes, rarely, they do good work. There are actual reporters working for Buzzfeed. But be honest, you have no idea if the above image is a real Buzzfeed headline or a fake one. Because it could be either.

And in actuality I won't be doing any of that because I'll be busy at a district event and one of my wonderful co-moderators will be taking the reigns.
Posted by The Weird Teacher at 3:14 PM No comments: