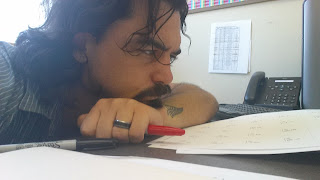 I really want to do a chat on the Supreme Court decision that makes marriage simply marriage. It's an important topic and something we should celebrate.

And I can't think of a way to approach it in a chat right now. We've had the discussion a few times here at #WeirdEd, it's always been great, and it would be great again. But it might be back patting. I can't find a new way to throw that ball.

In fact, this week especially, I'm having a hard time finding ways to throw anything new and education related. I think I know why- Summer Break is freaking long. And at some point, without fresh ideas flowing in from day-to-day with the kids (you know, the reason for the job) it gets hard to have conversations. Even though it might not seem like it, a lot of #WeirdEd comes from my classroom. It's about the kids, and the kids inspire most of what I want to talk about. But the only kids I'm around right now are my own and, as adorable as they are, they aren't fertile ground for an edchat. Until I write one about parenting which I just talked myself into just now while you watch and which will probably happen in the next few weeks.

I'm seeing it all over twitter too and I honestly believe we're all feeling the lack of Kid. Conversations are more circular than normal. Chats feel more repetitive. Fights are getting picked more often over smaller and smaller things. Some arguments are completely warranted, but some are starting to feel like ways to fill a long evening of PD On Tap.

I don't want #WeirdEd to get repetitive and expected and cliche. I'm worried it already is a little and I spend more time than maybe I ought to trying to come up with a way to break the format.

A friend asked why I don't just take the week off then, put the chat on hold until I have a better idea. But I feel, and I might be wrong, that #WeirdEd is one of those places people come to on Weds night looking for fun, looking for something, and taking that away is wrong. I'm trying not to make the chat sound like more than it is, but it is something to some of us. It's something we need. I need. Taking a week off due to lazy just isn't an option for me.

So this week will be a Human chat. We've done something similar once before. I want to get to know all of you better. I want us to get to know each other. Sometimes we have hard chats. Sometimes we have super goofy ones. This one will be a bunch of people sitting in a room, making those little horseshoes of friends and acquaintances, chatting over beer and chips, trying not to check your phone or the TV too often. Tonight is not an edchat. It's just a chat. If teaching comes up then it comes up and you pursue it. But it's not a goal. Tonight I want us to decompress, get to know one another, make new friends. Bring a friend. Let's have a nice night.

And remember, if the cops show up because we're getting too loud it was all Nathan Stevens' doing. We're just passing through.
Posted by The Weird Teacher at 11:37 PM