[Ed. Note- Not written by me, written by Jenny Kostka. This post is serving a dual purpose. It's this week's #WeirdEd overview and it's a way for some of us to remember an important person in edtech and for some of us (read- me) to realize we really should have known his name before he died. I'm also cross-posting this at the CUE blog] 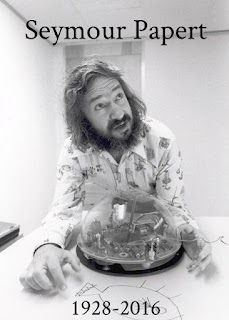 Let’s play a game. Guess when the following quotes were first published:

“[W]hen a child learns to program, the process of learning is transformed. It becomes more active and self-directed. In particular, the knowledge is acquired for a recognizable personal purpose. The child does something with it.”

“[M]any children are held back in their learning because they have a model of learning in which you have either ‘got it’ or ‘got it wrong.’”

“Most of what has been done up to now under the name ‘educational technology’ or ‘computers in education’ is still at the stage of the linear mix of old instructional methods with new technologies.”

Any of those could have been posted on Twitter in the last week, right? You’ve got growth mindset, self-directed learning, lamenting the use of potentially transformative technology to sustain the status quo. If that last one had included the word “worksheets” it would have been just about perfect.

In fact, all those quotes come from Mindstorms, a book written by Seymour Papert in 1980. 1980! For Pete’s sake, I was wearing diapers in 1980. Papert’s work in education, going back to the 1970s, was, if you’ll pardon the cliche, truly revolutionary and ahead of its time. And if you’ll also pardon me being a little bit dramatic, it changed my life.

I first read Mindstorms when I was trying to learn more about Scratch, the block-based coding program developed at the MIT Media Lab. Mitch Resnick, who leads the Lifelong Kindergarten group that created Scratch, was a student of Papert’s. The book was mentioned over and over again in everything I was reading as The Book that originated Scratch’s open, exploratory, and powerful approach. So of course I read it, and was completely blown away by how clearly and compellingly he wrote about kids and computers. He called his philosophy “constructionism”, and he expressed it by saying that kids (and adults, for that matter) are motivated and inspired to learn when they are using that learning to make something they care about, that a teacher’s most important role is to provide them with the tools and freedom to make those things, and that the computer is an especially powerful tool when kids get to use it for creation.

After reading his book, I started to look for more opportunities to let my students make stuff. I started to give fewer directions and more freedom (which was really hard). I started to let them fail a little bit more, and resist the urge to correct and figure things out for them (which was even harder).

Eventually, I even took a year away from the classroom to study at the Harvard Graduate School of Education, where ScratchEd, Scratch’s research and collaboration with teachers, is based. I took a class on constructionism that made my head explode and I spent as much of my year as possible learning about how to bring making and constructionism into my classes. For me, Mindstorms was the catalyst for the biggest and best changes I’ve ever made in the way I teach.

It may have taken a while for Papert’s constructionism to become widespread, but these days it’s everywhere: the maker movement, the push for computer science, project-based learning. Maybe the word constructionism isn’t exactly a buzzword (yet), but the ideas pop up in all sorts of forms and in all sorts of places. “Learning explodes when you stay with it.” “The kind of knowledge children most need is the knowledge that will help them get more knowledge.” (Seriously, the guy is endlessly quotable.) Seymour Papert died on Sunday, at the age of 88, but these ideas aren’t going away anytime soon. At least not for me.

Bio: I’m a science enthusiast, an obsessive nerd, and a mom. I teach high school physics, astronomy, engineering, and computer science at the South Shore Charter Public School in Norwell, MA, where I try to bring making and creativity into all aspects of learning. I'm on twitter @jenfromri