Tom Riddle and Anakin Skywalker- A Study of Students 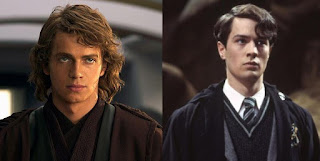 Gifted beyond their years. Driven to be the best in their fields. Attentive, questioning, creative, full of mischief and just enough of an anti-establishment streak to make them interesting.

Tom Riddle and Anakin Skywalker sound like the kind of students we want in our classrooms.

Skywalker might have been a little too emotional at times, but the relationship he formed with his teacher allowed them both to accomplish incredible things. Obi Wan was there when his teacher, Qui-Gon Jinn, saved Anakin. Plucked him, in the best tradition of Teacher-As-Savior, from poverty and strife and brought him to the best school he could. Sure, Master Yoda wasn't keen on letting the kid in, but damnit, Qui-Gon is a teacher and teachers fight for what is best for our students. His gamble paid off too. Anakin was driven by something deep inside to progress as fast as he could. His methods weren't always what Obi Wan expected, and he stumbled often. That's how we learn though, and each failure drove him harder. When a teacher gives a student an assignment and that student completes it in a completely unexpected way that still accomplishes the goal, that's when you know real deep learning has taken place. Anakin Skywalker wasn't always an easy student, but he was one hell of a learner.

Tom Riddle was also saved by a teacher. Dumbledore knew the boy was troubled, but that made the challenge all the sweeter. Riddle was proof that extreme talent could come from anywhere, and it would be a terrible thing to let that talent fall through the cracks. He read further and deeper than his classmates, and on topics that his teachers hadn't yet assigned. He disrupted the education process and differentiated it for himself. A self-driven learner, he found passions and pursued them, using teachers when needed. He became the ultimate student. That drive was a little unnerving, and he tended to look a little too deeply at you, but there was such intelligence in there. Irresistible to a teacher.

The signs were all there for Obi Wan and Dumbledore to see. The seeds of who these two could become. So they taught with love and understanding, giving of themselves and providing all the experiences they could. It wasn't enough.

Can Obi Wan and Dumbledore be held in account for the rise of Darth Vader or Lord Voldemort? They were both warned, Obi Wan by Yoda and Dumbledore by his very first conversation with Riddle. Without them neither of the boys would have grown into men that brought entire cultures to their knees. It's not their faults, surely, but they did educate the boys. A teacher can't control what a student does with the knowledge they are led to. The other half of our job, certainly of Dumbledore and Obi Wan's job, was teaching the responsibility that comes with such power. After all, with great power, comes- wait, sorry, that's jumping into a third universe, and that's just too much.

It's reasonable to say that Dumbledore and Obi Wan did everything right, as far as they could. Anakin and Tom were unknown talents. How can you not help that talent grow and be a little blinded by the light of it? In that blinding light, Anakin was drawn away from his teacher by another, who promised to move him along faster, help him reach greater heights. Obi Wan preached patience, and Anakin didn't have it in him. He was impetuous and strong-willed. So he abandoned his teacher. Tom used his teachers, taking all the information he could from them, providing one of those marvelous teaching opportunities to go above and beyond the prescribed curriculum. And he used that knowledge in new, creative ways! What joy, to see learning become assimilated, synthesized, and used for the creation of new knowledge. His flaws were, due to the rules of genre, within himself the whole time. There was no saving Tom Riddle. Without Dumbledore he would have wreaked havoc on some scale as he gained control of his powers. Dumbledore just gave him to keys to the castle, as it were. Riddle's fatal flaw was hubris, he thought he knew it all and so was undercut by old knowledge he should have found but didn't think was important. And then again, at the end, hubris undid him when he thought he had all the pieces to a puzzle but had one significant Draco-shaped one wrong. By then he was unable to think his way around the problem. There's the key-

Darth Vader's famous line when confronting Obi Wan is, "When I left you, I was but the learner. Now I am the master." And that's after he kills a classroom full of kids. Voldemort sees Dumbledore as an "old man" and literally destroys a school. Maybe their final turn was only made possible when they stopped being learners and believed themselves to know it all. Lord and Master- doesn't sound like learners.

We come back, then, to their teachers. Dumbledore continued on. He kept teaching, kept raising the next generation of wizards, perhaps to keep an eye on those who's power was growing under him? Obi Wan ran. So did Yoda. There were other reasons, but they didn't teach again until a student came to them, asking to be taught. And it looks like this is a lesson their next student learned as well.

What can we do as teachers but teach to the best of what's inside our students? With knowledge we also impart the human element. As much as relationships are the sugar than helps the medicine go down, they're also the bonding agent that connects the knowledge to the wider world. Would Dumbledore have done something differently if he'd have known for certain who Tom Riddle would become? Would Obi Wan have? That's not the way of a teacher. They'd have heard the warning, then redoubled their efforts, because teachers don't give up on their students.

Teaching is a long game, and uncertain. Both Dumbledore and Obi Wan were able to atone for their teaching mistakes, they each trained the one who took down their students who'd gone wrong. Maybe, then, this is a post about learning from failure, even great failure. How a teacher can reflect, and use the future, the long game of education, to eventually soothe the mistakes of the past.

Or maybe it's if you really screw up a class you can always train next year's class to kill them. Might be that too.


If you like this post and the other posts on this blog you should know I’ve written two books about teaching- He’s the Weird Teacher and THE Teaching Text (You’re Welcome). I’ve also written one novel- The Unforgiving Road. You should check them out, I’m even better in long form. I’m also on the tweets @TheWeirdTeacher.
Posted by The Weird Teacher at 4:35 PM