Singles and Doubles Keep Us In The Game 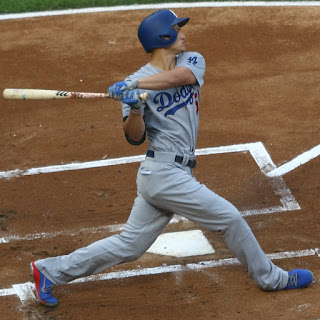 A popular teaching cliche is, "It's a marathon, not a sprint."

That cliche doesn't work as well as its users want it to. Any distance runner will tell you that however difficult you imagine a marathon is, it's harder than that. There's a saying in distance running: "Run until you can't. When you can't run, walk. When you can't walk, make sure you fall forward." Distance running is all about pace and suffering and attempting to find the balance between the two. Then it’s about realizing there is no balance and embracing the suffering until you slowly lose your mind and experience the popular delusion known as a "runner's high," which is really just your mind giving up on you seeing reason and deciding to let you die in peace.

So, if we use “the marathon” metaphor to talk about teaching, we're implicitly talking about embracing the suffering and pain that comes with an endurance event. Words create thoughts and meaning, and as hard as teaching can be the mindset that teaching is finding a way to survive and pace out suffering is a negative, hurtful one. Teaching isn't a marathon.

But sports metaphors are fun and, while not perfect, scan fairly well. So, let's move away from marathons and sprints to something that better represents teaching: baseball. As American as apple pie, 4th of July BBQs, and taking voting rights away from people of color.

Teaching is baseball, and lessons are at-bats. Sometimes, we strike out. Sometimes, we knock a lesson out of the park. Most of the time we just want to get on base.

Baseball teams live and prosper by getting on base. Singles and doubles keep teams in games. It's a rare batter who steps to the plate looking to cream the ball, sending it in a beautiful arc into to the centerfield stands. And it's an even more rare batter who can actually do it. Odds are if you swing hard for the fences, you're gonna screw yourself into the dirt. In fact, the last time baseball fans got excited about a bunch of guys hammering homers, it turned out they were cheating.

We want to do the best for our kids. We want every lesson to be a home run, out of the park, fans up on their feet, fireworks shooting in the sky while their teammates mob them at the plate. How amazing would that be? What a teaching day. What a fantasy land. In the end, Mighty Casey has struck out.

Day-to-day teaching, the real work, isn't about home runs. It's not about those lessons that consultants and keynotes go on and on about. Those are great goals. Those are great to have in a pocket. But setting that standard every day and attempting a home run at every at-bat? You're gonna pull a muscle.

Baseball is a cumulative game. Base hit there, double there, maybe a walk, and you've got a win. Major league baseball teams play 162 games over the course of a season. If batters go cranking for the fences every single game, they aren't going to finish the season. Their muscles won’t tolerate that stress.

Players accept that. Good baseball players know the game is more important than their stat line. Maybe they didn't have the flashiest game, but they know the work is grinding out a few solid doubles that moves the team along. In a healthy, sustainable way.

ESPN helped popularize the highlight reel, a quick burst of all of the flashy awesome that happened during various games all over the league. Highlights out of context from the game are pretty but meaningless. The game is so much more than that. Because of this, I have major concerns about the connected nature of education. Not in an old-man-shouts-at-cloud, "You kids today with your twitters and your FacePlus" way, but in a, “what do we get when all we see is the highlights” way. When the conversation is so focused on those Big Lessons, the ones where you dress up and plan a ton for, what happens to the day-to-day lessons? Don't tell me every lesson is like that, every day. I'm teaching day-to-day. I've got a class of 31 fifth graders and a student teacher, plus a MakerFaire to plan, hoops to jump through, and assessments to grade. Because all that's real teaching. We should be sharing all that.

Encourage the home runs. Love them, they are super cool. Create experiences. But that's not the job. The job is to teach, to create lessons that build on each other. Lessons that grind sometimes because the grind of repetition makes learning into practice into habit. What comes after the home run?

Now, you might think I'm a cautionary teacher, slow to adapt and try new things. On the contrary. I’m a cliff jumper when it comes to teaching. I will jump off just about any cliff if I think I'll find a way to fly on the way down, or of I think there's strong student learning to be had at the bottom. But that's not day-to-day doubles-and-singles teaching. Jumping off cliffs all day isn't healthy. Eventually you misjudge the wind and become stuff on a rock. And I’m not jumping alone, my whole class is holding hands and trusting me, jumping with me. It’s irresponsible of me to repeatedly dash their learning against the rocks because I want the awesome lesson more than I want the learning.

Among the many factors that contribute to teacher burnout, Keeping Up has to be on the list. And the connectedness of educators and teachers contributes to that. It's on us to temper the home runs we share with embracing the on-the-ground, daily-grind teaching. To take a breath and celebrate doubles and singles. Moving kids around the bases slowly but surely. Supporting each other with high-fives and totally not-at-all weird butt slaps.

We should stop letting success and failure be dictated by people who aren’t in the game, playing every day, getting dirty, getting hurt, getting up to do it again. You know what a hit looks like in your class. Listening to an outsider’s look is one thing, but don’t let someone who isn’t picking up a bat be the final word what’s fair and foul.

Play hard. Look for runs and every opportunity to score. Celebrate the bloop singles that turn into doubles and triples somehow. All the while, know that those doubles and singles are advancing runners and adding up to a winning season. And it’s a damn fun game.

Post-Script- This metaphor works to the point, but it’s not a sports metaphor so it doesn’t fit in the post itself.


To take a quick look at the other education metaphor that circles this, Moonshot Thinking is great. Aim high (don't tell kids if they aim for the moon and miss they'll land among the stars because that's bad science and you know better). But remember that we didn't decide to go to the moon and *poof* go. We exploded. A lot. Once we figured out how to not explode we edged into the upper atmosphere...nope, no death here. Guess we can do a lap and see if we die doing that. Nope, still ok. The landing is rough, what with the crashing into the ocean like a rock and all, but it's doable. Still not ready to go to the moon though. Now we practice the stuff we need to go to the moon. We do a bunch of laps around Earth running scenarios and procedures. Now we're ready. To fly around the moon, look at it, check it out. Then, finally, we land on the moon. That's a moonshot.
***

Posted by The Weird Teacher at 9:25 AM