Ally or A Lie 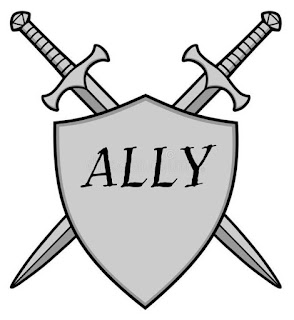 I've never self-described as an "ally"*. It's a popular term right now, used all the time to describe someone says they are supportive of those whom society traditionally pushes down, walks upon, sexually assaults or shoots without repercussions.

And I'm immediately suspicious of anyone who goes out of their way to call themselves one.

Words have power, and too often words that initially carry a positive weight can be turned around. Ally is one such word. “I’m an ally” can quickly feel the same as “I’ve got a black friend.” It’s just a word. Without action it means nothing. That’s the thing about words that become labels and titles. Anyone gets to use them. Which means anyone gets to define them. And that’s where it gets tricky.

Let’s say I decide to call myself an ally. Let’s say I even am, at least at the most basic level. Suddenly “I’m an ally” becomes a cloak I can throw over myself, something I wear so everyone can see it. Look, I’m an ally. And, believing my own righteous allyship, I begin barging into conversations where it is better for me to listen rather than talk. Instead I shove my nose in, pontificating and well-actuallying. When called out on that my cloak of allyship becomes armor. I throw up a shield on which I’ve emblazoned ALLY and protest, “Hey! I’m an ally here. Why are you being so mean/aggressive?” It becomes a sword, Ally written in fancy script along the blade. “This behavior of yours will not net you more allies, you know. You should be glad I’m here to help you/support you/give you voice.” Suddenly my allyship is what’s allowing you, who I’m supposedly there to back up, a voice.

Sometimes it feels like straight white people (choose your combination, there’s a lot going on there) think being an ally is something that, once you get labeled as, you are forever. Like it’s not constant work to be better. That’s one of the problems with a label like that. Once you get it on you it’s hard for someone else to scrape it off you. Trust me, white men love to cling to the ally label. They wouldn’t self-describe (out loud, they already have in their heads) at first. But if someone else calls them “ally” - Game On. Getting that tattooed on my Twitter bio as soon as I can find the edit button. As if being called “ally” by someone else, a member of one of those groups from the first paragraph, grants a Get Out Of Jail Free card. I can say what I want, wade into the conversations and start throwing my weight around instead of listening, because Person Of Color X called me an ally. As if that person speaks for everyone. Like I was knighted. Ally Doug of Gresham, first of his name. Like there was a meeting, a vote, and I won. Lifetime appointment. “I’d like to thank all Muslims for deeming me worthy, and now I’d like to tell them how I’d do things.”

Which makes it all the worse when an “ally” is an asshole, right? Not so much when an ally is wrong, wrong happens all the time. Wrong is growth as long as you see the wrong, hear the corrections, and are gracious in accepting it. But when Ally becomes armor, sword, and shield, that’s a betrayal.

What’s better- a panel on diversity made up of allies (self-appointed or otherwise), or a panel made up of all the people Trump hates (aka- everyone but straight white men) on literally any other subject?

It should be made clear- Being an ally is not a bad thing. It’s a good thing. But is it something to aspire to? Not as a noun. “What? Doug, are you saying I shouldn’t aspire to being an ally?” Kinda, yeah. Let’s break down what the word really means in this context. An ally is someone who stands up when they see an injustice, shuts up because they know they should listen and learn, and stands with those the power structures, like white supremacy and toxic masculinity, would trample. Shorter- An ally is a decent person. Should “be called a good human” really be something that needs a special name? Should I be so proud to say, “So-in-So says I am a good person.” Wow, dude. High bar. How’d you clear it without clipping your heels?

Aspire to act as an ally. Aspire for the verb. But not for the name. I suppose it all comes down to how the word relates to action. Ongoing, constant, reflective action. How often is the question asked, “But how can I be a good ally?” Be cool, shut up, help, don’t be the center, and take it to others in your circles so the burden isn’t constantly on those already burdened. Allyship isn't performative, something you do so others will stand back and be in awe. Allyship can be hard, sometimes standing up to people is. You’ll end up standing up to friends or family. Do it anyway. For others. Not for yourself. The name is great, but if that’s all it is then it’s just one more appropriation, just one more aggression. Should it be being proud to be an ally, or constantly self-checking to see if you are? Do my actions suggest that I’m in it to be seen standing on the mount shouting “Dig me and how great of an ally I am”, or to be one?

Actions, not labels, are the truth or the lie of an ally.

[Ed. Note- After I wrote this post but before I published it this brilliant thread on the same topic by Shana White was brought to my attention. Read it.]


*I’m suspicious that just saying this undercuts everything said afterwards because it kind of feels presumptive, like “I know I am an ally, but I’d never call myself one.” Hopefully the nearly nine hundred words that follow it clear that all up.