A Textbook Case of Media Matters 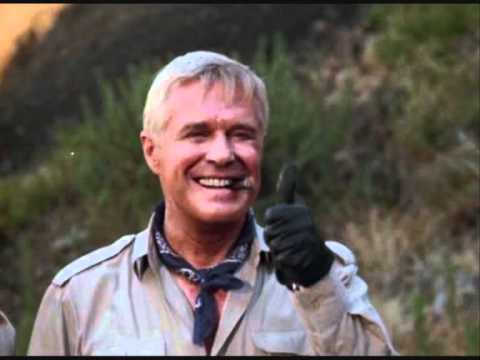 "I love it when a plan comes together."
- Hannibal Smith

There are few things more fun in teaching than seeing a possibility in something, putting all the pieces in order, and then it all working exactly how it is supposed to. Nothing ever goes off without a hitch, that's the assumption. Mr Murphy of Murphy's Law fame is always there, waiting for an opportunity to upset the apple cart. When he misses you it's a great feeling.

Last week we started a story in our textbook called "Coming Distractions: Questioning Movies". The story is a non-fiction look into the making of movies, from CGI and special effects to the unreality of certain situations, to editing, to sales and messages. It was those last two that interested me the most. Unless you ask my students. They'd tell you it was a toss up between those two and the special effects sections. But, in my defense, if the book brings up the first JURASSIC PARK in its special effects section you're basically honor-bound (for my Canadian and British readers- "honour-bound") to find the T-Rex car attack on YouTube and look at the masterful way it combines practical effects, puppets, models, and CGI *cough andwhythatmakesitbetterthanthemorerecententriesintheseries cough*. Also I got to show them a side-by-side of Andy Serkis doing Gollum live and what it looked like in the final product. Again, the story brought this up as a specific example, so I was just supplementing what the text was giving my kids. Adding context, as it were.

We got to dig deeply into how movies and television shows are sold to you, and the messages that are put into the text and subtext of the media the kids are consuming. This, as far as I'm concerned, should be a lesson we teach constantly from year one of school. We teach them food nutrition, watch what you put into your bodies. Not to judge, but to be education. Same with media. Here are the ways you're being sold things, here are the messages implicit in this, here's how to see them so you can be an informed consumer. I picked on Pepsi quite a bit because it's an easy shorthand to take a sip of my coffee, pretend it's a Pepsi can, and talk the kids through, "What's it mean if you can see the label?" Turn my mug. "Now you can't see the label. Now what's it mean?" And on to "Do you think the character is a cool character? Has he been good looking and smart and funny? And now he's drinking Pepsi? What's the message?" Then following it up with, "Now that good looking, smart, funny character you like is solving his problems by punching that other man in the face. Now what's the message? Is it different than the one Pepsi is sending you?" 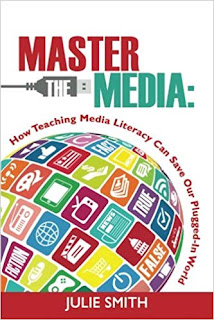 The moment we started going through the story I knew I wanted to end the week one way and one way only- With a video chat with a media expert. Lucky for me, I know one. Julie Smith is a college professor and author of Master the Media: How Teaching Media Literacy Can Save Our Plugged-In World. This is an excellent book not only for teachers but anyone who consumes media and wants to be smart about it. Highly recommend. Julie and I are friends through the twitter box and though we've talked a lot we've never actually met. We'd never even video chatted. I shot her a message on Voxer asking if she would be willing to jump onto a Google Hangout with my kids to talk about what she does as a way to give them a real closing to the story/introduction to the wider world of media literacy, and she said yes as soon as she got it. Because Julie is awesome. We picked a time, after doing the complex math that time zones require, I gave her some basic ideas to talk about, and it was set.

That morning I brought her book in to my class, because of course I own a copy of it, to introduce them to who Julie is, read them the back of the book to give them an overview of what she was going to talk about, and then we brainstormed some questions to ask her. This is always a fun little gamble. Tell thirty-three nine- and ten-year olds to make up questions to ask a speaker. You know your kids. You are picturing the kids that will ask the question no one on Earth could answer right now, aren't you? I'm not making fun of that kid, deep, specific curiosity is good. But often speakers agree to Q&A without knowing what they're agreeing to. Which, you know, mean it'll either be very enlightening or very interesting or very entertaining, or all three.

First, Julie talked about media literacy, touching on many of the subjects my students would be interested in and understand, keeping it at a fourth grade level without talking down to them. As a college teacher she was a little nervous about talking to younger kids, but you wouldn't have known that having watched her. She even dropped a funny fake headline on them that she'd mocked up to show them just how easily realistic-looking images can be created and dispensed through the interwebs. 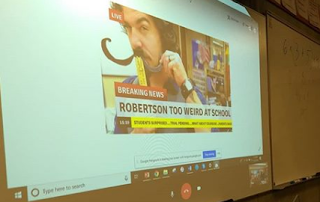 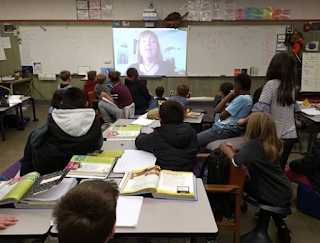 My kids asked excellent, interesting questions. And Julie gave fantastic, thoughtful answers. She talked about the Netflix model vs traditional TV and why there are no commercials and what that means. She talked about the Netflix algorithm, something my kids had never thought about and it completely blew their minds. "What do you mean, Netflix knows everything I'm watching? Holy cow, it does! That's how it tells me what other shows to watch! NETFLIX IS SPYING ON ME USING NETFLIX!" Welcome to privacy concerns in the 21st century, my friend. She hit them with password tips and tricks, like thinking of it as a passphrase or passsentence rather than a word. I might have written this one down too.

And her closing was dead-on perfect exactly what I wanted my kids to hear even though I at no point told her this- Watch who is in the media you consume. Who looks like you? Who sounds like you? Who is missing? Ask questions about what you see. Demand to be represented in the media around you.

After Julie's talk I had my students walk-and-talk to reflect on what they'd heard, because moving is good for thinking, ya know? Then we sat down and everyone wrote down a few ideas on their own of what they learned or thought was interesting. Then they shared in their groups. THEN we got Chromebooks out and hit up a Padlet I created to share our reflections. Which was a great way for everyone to see what everyone else was thinking and got a lot of, "Oh yeah, that too!" moments.

Textbook to Speaker to Reflective Padlet. All great tools in the classroom, all with specific purposes, and useful. There's no reason to throw any out because you'd be throwing out potential ah-ha moments and deeper lessons than any one of those tools alone would allow. There's nothing quite like seeing a path you can take your class on that cuts a straight line though all the learning goals of a specific unit and uses a variety of tools. That kind of creativity makes this job great. And getting it to work just makes me hungrier to do it again and again. Every time (even the plans that don't survive contact with actual students).