I Used To Do But Now I Don't- Spelling Test Edition

When I eventually get around to writing the second Weird Teacher book ("He's the Weird Teacher II: Maybe This One Will Make Me Famous") I plan on doing an entire chapter on this very topic. But, because I think it's an important topic that I'd like to talk about and reflect on we're doing one now. The idea, for those of you who didn't pick it up from the title, is to look at something I used to do in my classroom that I no longer do, and investigate why. 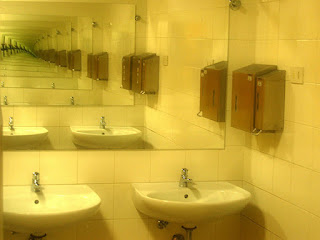 With few exceptions all my favorite musicians have evolved over their careers. That is, quite frankly, one of the things I enjoy about them. I like it when a band follows their hearts and the muse and changes their sound. Even when it doesn't work, at least it's interesting, at least they tried something (I'm looking at you, Lulu*). Nick Cave is constantly reinventing himself, you never know what the next album will be while at the same time you can track him from album to album and in that timeline everything makes sense. Devin Townsend is the exact same way, every album he releases sounds like exactly the album he needed to make at that time, regardless of whether or not it sounds like anything he did before. Rush changed over their career, constantly redefining what it meant to be Rush. The only bands I really love who never did that are Slayer and AC/DC. And that's because they immediately perfected what it what they were and did that to varying levels of success their entire careers.

If you've read pretty much anything I've written you know that I filter a lot of my thinking through music. I naturally think in metaphor, and because teaching is an art and a science and everyone does it slightly differently even though at the core we're all using the same 12 notes, I think about teaching like I think about music.

All that to say, much like my favorite bands I have evolved my teaching over time. And, much like the bands I've mentioned above, it's not intentional. I do not set out at the start of every school year with the goal of "I Shall Do Things Differently This Year." Why would I make that a goal? I mean that honestly. That kind of a goal is performative. It's saying "I Will Make This Harder Than It Needs To Be To Make a Point." Nope, that's not why I do things differently every year. I do things differently because I change, my thoughts about teaching change, my students change, so my classroom naturally changes. Not everything changes. I've been using puppets for near on a decade and I don't see them going away any time soon, though I do use them much less than I used to. I've been building in my room for about five or six years, never used to do that. Tech came in hard and then ebbed and now it's all about balance. What works when and why? It's why I lucked out with the Weird Teacher thing (also not intentional)- simply being "weird" means changing things is right in the name. Lucky break that.

Let's get specific though, because it's not like me to speak in generalities. Let's pick something I used to do, something I even wrote about in He's the Weird Teacher, that I no longer do.

I used to give a weekly spelling test. I'd assign the fifteen or twenty words from the book on Monday, along with some kind of homework (that'll be in here too) that went-


Monday- Write each word five times.
Tuesday- Pyramid Write the words (ie s, sp, spe, spel, spell, spelli, spellin, spelling)
Wednesday- Write a sentence for each word.
Thursday- Have some one give you a spelling pretest.
Friday- Write only the words you missed on the test five times.

During the week we would spend some time talking about whatever the spelling skill that the words were practicing were, like tense or prefix/suffix or the /ei/ sound spellings. At some point in the day on Friday I'd give a spelling test. Half sheet of paper, write your name and the date, number one to twenty, I'll say the word, use it in a sentence, say it again, here we go.

I tried to make the tests fun. That's a big part of the chapter in Weird Teacher. How I'd play with the words, get silly with the sentences so the test wasn't a drag. "Scrambled. I went to a diner for breakfast and when the waitress asked what I wanted I said eggs, and she asked how and I said scrambled. She repeated 'Scrambled?' 'Scrambled,' I confirmed. 'Scrambled, got it,' she said. Then I ate scrambled eggs. They weren't good. Should have gotten over easy. Scrambled." All the laughs, right? Except, upon reflection, who was I entertaining? Me, way more than the students. For every kid who laughed at that silly sentence, how many were confused or overwhelmed by it? Who wasn't I helping by doing that?

After the test I'd settle down and grade all of them, or we'd trade and grade each other's. Make sure you use red pen! Make sure you're polite and cool, we're all in this together and no one makes fun of anyone else. Did that work? What was that like for my kids that always bombed the test? "Oh great, someone else is gonna see how bad I did, but Mr Robertson said 'be respectful' so I'm sure it'll be fine."

I stopped giving spelling tests completely a few years ago. Looking back, I think my initial reason was that it was just eating up too much time on Fridays. The test took forever, plus I was still giving the comprehension and vocabulary test at the end of the story every week. Friday's reading block was Test Day. Easy to plan, but what a waste of a fifth of my week. I was also finally noticing that the same kids always did poorly. It wasn't working academically. So I dropped it completely.

Now I tie spelling into reading and writing. I try to make it as organic as possible. You learn to spell as we read and as you write, because you need to know the words. You see patterns emerge because I'm guiding you to seeing them, until you start seeing them for yourselves. I'll stop and point out unique spelling characteristics of words, especially things that native English speakers do automatically but others might not, like doubling the final consonant in single syllable words when adding a suffix. No one know why they do it, they just do. And WHY is the Big Question in my room. We learn those things.

However, I'm getting to the point again where I'm not sure I'm on the right path. I don't want to go back to spelling tests and spelling homework (oof, let's not go into the assumptions built into "Have someone you live with give you the pretest Thursday night"). BUT, at the same time I'm not real sure my laissez-faire, let it be organic, it'll come naturally maaaaan thing is working as well as it could be. I may have de-emphasized spelling a little too much. It's part of our editing process. I call it COPS (Capitalization, Organization, Punctuation, Spelling), so the kids do it. They know it's important to do. But maybe I'm not teaching the How as well as I could be. I know spelling is 90% memorization of rules, so the "read a whole bunch" thing ought to work, but only if the kids are actively paying attention to the spelling of the words.

I think I need to start easing spelling lessons back into my language arts time. Not Big Spelling Lessons, not tests, but be more intentional about finding those opportunities to stop for five or ten minutes and get into the weeds.

What did you used to do that you don't any more? Why?

*Lulu isn't good, but it's also not the awful monstrosity that fans like to make it out to be. (That's St. Anger.) Lulu is a real interesting experiment that shouldn't have worked and mostly didn't but still deserves a listen just to see what Metallica and Lou Reed wanted to try and do. I like that this band that could make the exact same album over and over into forever instead decided to try and make a weird, off-putting, ill-advised thing, and then put it into the world. They didn't have to do that. Risk, right?

If you like this post and the other posts on this blog you should know I’ve written three books about teaching- He’s the Weird Teacher, THE Teaching Text (You’re Welcome), and A Classroom Of One. I’ve also written one novel- The Unforgiving Road. You should check them out, I’m even better in long form. I’m also on the tweets @TheWeirdTeacher.
Posted by The Weird Teacher at 10:44 PM