The New, The Old, The Revised, The What The Hell, and The Future 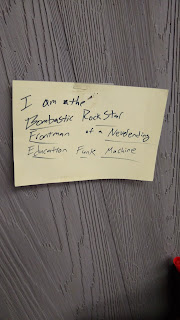 Teaching at the start of the year is wholly an exercise in Finding The New, The Old, The Revised, The What The Hell, and The Future.

This, I think, is one of my favorite things about teaching. I get to be reincarnated* at the start of every year. Teachers are the walking answer to "If you could go back in time and give a message to your younger self, what would it be?" I get to do that. I get to reflect back on the previous year, on everything we did, and rebuild all of it again. Especially when I'm teaching the same grade level again, like I am this year. Technically I could do every single thing exactly the same. I still have last year's planner. I could probably follow it if I wanted to, and once I moved where the Music, PE, and recess times went I could make it work.

I spent a bunch of days last week setting up my classroom. I had to do The Full Set Up too because they painted my room over the summer, so at the end of the year I had to take everything off the walls, move all the desks around, put everything into boxes, the whole nine. It's huge pain to do The Full Set Up. Except...I kinda like it. I like starting from that blank slate and seeing my room empty. I was pretty sure my desks would end up organized like they have been for a few years now, in six groups of four to six, a combination of low, normal, and high desks. I like that because we do a lot of group work in my class so having them built into groups helps my flow. But I also don't want big tables for groups because then you can't split them up and use them as singles or duos. I want maximum flexibility. Because every single thing in your classroom sends a message to the kids. Groups says "We're gonna talk, we're gonna collaborate, you're gonna have to figure out how to make eye contact with your friend and still hear what I'm saying." Unassigned groups, which is also what I do, adds to that. I don't tell kids where to sit on the first day. "Find a seat. Make a good choice." Choice. It's right there. Immediately. As crystal clear as a Miles Davis solo cutting through the mix.

I have a student teacher this year so he got to come in and experience The Full Set Up. I'm quite sure it looked easy to him, because even though you're constantly talking out loud when you've got a student teacher, constantly doing a running thought-by-thought, it all happens very quickly. Later in the year I will let him design the room if he wants to change it. I'll even let him build the seating chart because there will probably come a time, probably November or maybe February, when the kids get a little too relaxed and they forget that just because the big rule is class is Be Cool that doesn't mean we have no expectations, and they will need a reminder. I love watching student teachers do seating chart calculus. But right now while he watches the set up happen it seems automatic. Clear. Even if I am saying what I'm doing he doesn't really know that the class library is in a slightly different place than it was last year, and this piece of the Making Area is new and might actually help the room stay slightly more organized than normal.

I get to find The New. What a joy. Things I've wanted to try, ideas that came over the summer, ideas that came from my student teacher (The Apartment, for example, which will probably be its own blog post at some point), ideas I forgot I had until the reminder I put in my phone pops up. (Pro Tip- Don't try to remember things over the summer. But the idea in your Google Calendar, set the event for that set-up week, and forget about it until you can actually do something with it.)

Then it's The Revised. Yes, gimme that assignment that only kinda worked last year. I don't have to build it again so it's already easier to use, I've got at least one year's worth of data from the kids on it so I know what went well and what didn't, and let's get our Frankenstein on. Let's throw it at the student teacher and see what he does with it. I'd rather him get ideas like that than from Pintrest. (I get so Old Man Shouts At Cloud about Pintrest lessons for a few reasons, but one is that I think I'm a more creative teacher because when I was coming up there was no Pinterst, no Twitter, no Facebook. If I wanted a creative lesson I had to build it. I think that made me stronger. But that's its own post too, I'm sure.)

I also love finding The What The Hell. Remember those lessons? I don't think every project needs to be a home run, that's ridiculous Thought Leader talk that leads to teacher burn out and thought leader speaking gigs about burn out. Like a baseball team, we live and die on singles and doubles for the most part. The What The Hell are the pop flies. The accidental bloopers. The wild pitches that maim the mascot. The lessons I blocked out until that damn story shows up again out of nowhere (because I didn't look ahead in the reading book) and I have the exact same idea that crapped out last time but then remember how it went in a flash of teacha vu and am able to change it. Or scrap it completely.

And The Future. Mmmmmm. Even in a grade I've taught before there's the mystery of what new could happen. This, I think, comes with time and with faith. My class did some really cool things last year and I don't want to/can't repeat them. My competitive side wants to top them. My realistic side wants to at least meet them. And my rational side has no freaking idea what any of that looks like yet. But it'll come. It'll happen. Like Sarah Conner says, the future is waiting to be written (five nerd points to anyone who points out why using this particular time travel franchise is a terrible way to make the point I'm trying to make).

I start school again tomorrow. My next year. My student teacher's first year with teacher in his title. My students' first time in fourth grade. We're all jacked on nerves. Will they like me? Will we get the work done well? Will they get my way of doing things and will I get theirs? Can we get on with it already.

Time to have faith that the new, the old, the revised, the what the hell, and the future are out there for us, ready.

*I've been watching a lot of Battlestar Galactica this summer and you're all lucky this didn't become a Teachers Are Cyclons But Good Guys post.

If you like this post and the other posts on this blog you should know I’ve written three books about teaching- He’s the Weird Teacher, THE Teaching Text (You’re Welcome), and A Classroom Of One. I’ve also written one novel- The Unforgiving Road. You should check them out, I’m even better in long form. I’m also on the tweets @TheWeirdTeacher. And I'm on Instagram at TheWeirdTeacher too.
Posted by The Weird Teacher at 9:53 PM