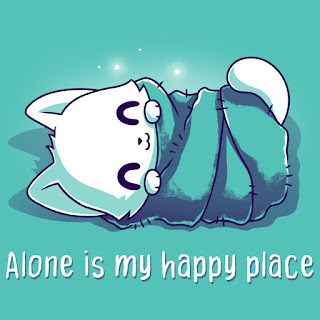 When you do a Google image search for "all alone" the first hundred responses (at least, I didn't keep digging) are all depressing. "Working alone" too, including this poor guy who I'm pretty sure is dead. For the header image here I even searched "working alone happily". Look at all those people who are not alone at all not even a little. This is some real interesting messaging- If you're alone, you're depressed. It's like all those teacher memes where we're supposed to get the introverted quiet kid to open up because that's like playing the video game on Hard. It completely ignores the joy of working and creating alone that many students (and teachers) feel. It emphasizes The Group. Why don't you want to be part of The Group? What's wrong? You should join The Group. The Group is good.

I like working alone. I've spent most of my teaching career working alone. Not because I'm anti-social or superior or a jerk no one wants to hang out with, but because even in grade level teams teaching is often a solitary thing.

My first job was teaching third grade. The other third grade teacher was also a first year teacher. So we planned together because it's harder to drown alone. Then I moved to Hawaii. Hawaii is amazing and they really do mean all that ohana stuff that makes it into the tourist material. Locals are the coolest people and I worked with a really big, really cool team my first year there. I got a lot of help, I was a second year teacher, after all. But the next year I worked with the meanest, worst women I've ever had to be around. I stopped eating lunch with them by the third week of school, I avoided them at all costs unless we were forced to work together. After that year I bounced around from third to fourth for a bit, all great teams, but as I started to develop my own teaching voice and style and beliefs I drifted away from the group planning. This is nothing against those other teams I worked with in Hawaii, they were wonderful (except the sixth grade team, who were the meanest women on Earth, like I said).  But the more established teachers had their Stuff and I was still building my Stuff and deciding that I would throw away a lot of my Stuff every year to make way for new Stuff. I'd always been different my whole life, and I was finally confident enough in my teaching for that aspect of my personality to come through.

So I planned with others as far as we all had to, but I was on my own out in my little portable too. This only got stronger as I moved back to the mainland and brought my growing sense of Weird Teacher-ness with me. Again, great team, great people, didn't really plan together, didn't really do the same stuff through the team.

It wasn't until I got to the school I'm at now where that started to swing back the other way, where I found a kindred spirit in Making. But he was also a loner as far as it was. So we'd bounce ideas off each other and then go to our rooms and create those ideas in our own students' image. Co-planning, but not at the same time. A happy balance. We do us, but I get to do me more. Perfect.

Cut to this year. My team of myself and two other teachers is wonderful. Really and truly fantastic. We get along better than I've gotten along with any other team, bar none. Planning takes place between cracking each other up. And we're very different teachers. One is a second year teacher, much more confident in himself this year, ready to take on new challenges, and one is a veteran teacher who is way more Type A than either of us, but willing to put up with our nonsense as long as she can see the whole and how it connects to the standards. A strong balance.

And I'm struggling with part of it. Not in a bad way, mind. I don't want this to come off like a complaint. But I like planning alone. That's the process I've built over fifteen years. So when we're having a planning session as a team and someone says, "Ok, but how can we make this more project-based learning?" I feel like I should have an answer. I'm a PBL guy. I do trainings and whatnot on it. My kids build stuff all the time. I should be able to hit them with ideas and we hash them out together and Boom, awesome happens.

Except, ideas don't really come to me like that. Ideas come to me when I'm staring at my computer, heavy metal blasting from the tiny speakers, spacing out, turning the most recent Journeys story or math lesson or whatever over and over in my head, talking to myself, waiting for something to come. Then a little light shows up, so I follow it, and eventually it becomes a Thing. But even then, most of the time I don't know if it's a Good Thing or a Bad Thing yet. It's just a Thing. The quality of the Thing won't become clear until I start saying it out loud at kids, or writing it out. And even then chances are high the Thing will change again once I'm actually working it with my students.

That's my process. It's slow and messy (unless the idea comes fast and fully formed) and it often looks like nothing until it suddenly looks like something. And that's really freaking hard to explain to a grade level team on Thursday afternoon trying to plan for the next week. "I dunno man. I gotta, like, talk to myself for a while." Even then, I know that when I try to explain it that first time it still looks odd. That's not because I'm The Weird Teacher and I've gotta stay On Brand. It's because that's how I see things. Last year I saw a spiderweb that became a metaphor for Westward Expansion that I got really excited about and didn't fully understand until my kids finished making it. Things always get bigger than they are initially. Or get too big and they have to be pared back.

None of this is a problem when I'm planning alone, or with a student teacher. I get to go on that little journey all by my lonesome, following paths and rabbit trails, pulling strings, standing in the center of my room, hands on hips, then laying down in the center of the room, then looking intently at a tabletop for a minute (ten minutes?), then playing air guitar when Slayer comes on, then finding it.

Michelangelo said that sculpture was not creating a shape out of stone, the sculpture was already in the stone and he had only to free it by removing the excess stone around it. (This is probably apocryphal but I love the metaphor of it so google it and correct me in the comments or twitter thread if you must.) The project, the plan, the idea is there, I've just gotta have faith and get to it.

That does not really work with two (or three if my student teacher is there) people sitting and waiting for you to be a part of the meeting. I'm having to change how I create and think. This is not a bad thing, evolution is good, teamwork is good, they make my ideas better just like I make their ideas better. But at the same time I like working alone. I like being king of my island of misfit ideas and wandering through it as I wish. I'm happy alone in my classroom, working out problems. I'm also happy in a small meeting, laughing and joking and hashing things out together.

For one last example of Doug Likes To Work Alone And Pretends It's Collaborative- today we had a half day training on co-teaching because of the push-in model we're doing with our SPED and ELL teachers. Who are both excellent teachers and I like working with them a lot. But as the trainer lady was explaining one of the co-teaching methods where the two teachers play against each other and focus on different things while working the same topic, all I could think was, "Hey! I do that with my puppets! I've been co-teaching with Courson. I do like this." So, in other words, my favorite kind of co-teaching is when I'm teaching alongside myself. Yeah, nice moment of self-reflection there, Robertson.

It's a good problem to have. It is still something of a problem though, and I'll have to keep an eye on it as the year goes on to see how I grow into it. I like problems.

If you like this post and the other posts on this blog you should know I’ve written three books about teaching- He’s the Weird Teacher, THE Teaching Text (You’re Welcome), and A Classroom Of One. I’ve also written one novel- The Unforgiving Road. You should check them out, I’m even better in long form. I’m also on the tweets @TheWeirdTeacher.
Posted by The Weird Teacher at 10:51 PM