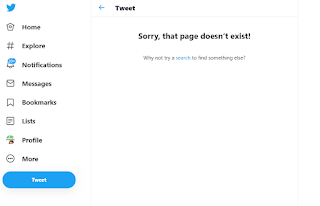 Let's clear something up right now: Putting "Satire" or "Funny observations" does not absolve you of the responsibility of being coherent and responsible in your education tweets. For every anonymous education account that tweets well there are a dozen that are terrible at it.

That's right, friends and readers- this is a blog about education twitter. Strap in.

There are more anonymous education twitter accounts that I prefer to think about. Most of them hide behind handles like @LOLTeacherProblems or @MindYourMindset or @YourDumbAdmin. They have bios full of weasel words like, "meant to amuse" or "these are jokes" or "satire" or "just observations meant to be inspirational". Things that attempt to distance them from the content of their feeds or brush off tweets as "just jokes" as protection.


Here's the problem with that- "Jokes" are not the same thing as "complaining about your job and/or students with a winky face". It's just not. I get wanting to complain. I get wanting to have a space to do that freely. I don't think that is a bad thing in and of itself. Where my problem lies is when the account, framed as a source of insight or comedy, supplies neither. The funny isn't that hard. Correction- One funny isn't that hard. Three funnies, especially about teaching (an incredibly funny profession), aren't that hard. An entire account dedicated to the funny? That's hard. Before deciding you should create an anonymous account with all your clever education observations try to be sure you have more than a half dozen of them. Because once the well runs dry you'll still have that account sitting there and you and I both know you'll want to use it.

What happens to those accounts? Let's take two recent examples. I'm not going to call either account out by handle because that sucks, and I'm not going to link to the tweets. I won't link to the tweets because both accounts have since deleted the tweets under pressure of push back. Not bullying, push back. Response in a public forum to what they said publicly. One even wrote a (terrible) non-apology, then deleted that, then deleted an even worse poor me apology, then deleted that. Courage of your convictions and whatnot, I guess.

The first account example frames themselves as a funny account. "Check me out, I have clever things to say." Most of the tweets are boring at best and sucrose or cotton candy at worse. Until the account decided to post (I'm paraphrasing) "You know what I hate about my students? When they use slang." The they gave an example of a slang phrase that literally anyone would say (and did), "Wait, are you mocking the way a student of color speaks?" That's a problem, but maybe the account could have added context. That's not what happened. What happened was the tweet went mini-viral and pretty soon (white) teachers all over were adding the annoying things their students say that also sounded like they were singling out students of color. This thread got longer and longer and more and more racist. Like openly, easily racist. And when the account who started it all was called on it they got defensive, they started blocking people (not me, even though I straight out called them racist in an RT to 21.7k people, but accounts run by teachers of color did get blocked). Eventually they deleted the tweet and posted the two non-apologies I mentioned earlier.

There's a lot of problems with this. First off, if the student's quote was taken out of context it's the responsibility of the account posting it to provide the context needed and asked for. Secondly, and this is more important, if the responses to your thread get increasingly more racist it's your job to shut that down or at least try. There should be replies from you to the offenders telling them what's not welcome in no uncertain terms. An artist can absolutely cull their followers. I point to the easiest example- Nirvana post-Nevermind. Nevermind was the biggest album on the planet and Nirvana exploded into places they never wanted to be, and suddenly people who should never have been in their fandom found them and decided to like them. So on the next album, In Utero,  they put this in the liner notes. 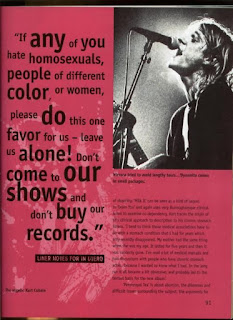 "If any of you hate homosexuals, people of different color, or women, please do this one favor for us- leave us alone! Don't come to our shows and don't buy our records."

You can't control who buys your stuff or follows you, but you can be very clear who and what is unwelcome. The second a twitter thread you start becomes toxic it's on you to at least try to stop that. "But I'm just trying to be a funny twitter account." Sorry dude, you started this, now own what you said.

The second type of account I want to talk about isn't sure what they want to be. They want to be funny, sure, but they also know that fauxspiration goes a long way towards those sweet sweet interaction metrics. So they will post what I suppose is supposed to be funny and mix in a nice helping of pablum and platitudes. The best kind of platitude? The kind teachers in February really want to hear? "Exhaustion means you're working hard. Being exhausted means you're a good teacher."

Holy crap, we're still doing this? I'm more of a martyr than you because I'm more tired? I love my kids more because I hate myself more? Pain makes teachers great? This is not a Thing! It has never been a Thing. Stop trying to make exhausted happen, Gretchen, or you can't sit with us anymore.

Again, lots of push back. Lots of tired, concerned teachers feeling the need to raise their hands and go, "Uh, this is a bad narrative and you should stop."

As a bonus type of account, we have the sunshine and rainbows ones that pretend at understanding mindset but only to the depth of a splash pad in mid-winter. I saw, and I swear this is true, an account about mindsets tweet "Feeling overwhelmed? Switch to excitement! Don't think you have to do it, think you get to do it!" Oh, that's all it takes to stop feeling this tired and overwhelmed? It's just a mindset issue? "You're depressed? Have you tried not being depressed?" This reduction of depression, anxiety, anger, frustration, and exhaustion to simple "Well you just aren't trying hard enough to be happy" wouldn't fly on My Little Pony (one of the best cartoons about friendship and relationships and conflict out there today)*.

I want to make note that I'm not going to go after the anonymous part of these accounts, just their content. Honestly, I would rather everyone speak with their own face because that forces you to stand behind what you say, but I also understand the reality of some school districts and how some teachers might not feel safe speaking their truth with their face exposed. So, while I prefer to say everything with my face and voice out there in the open, I understand why some don't and I won't fault them for it.

Keep the focus on content. Education twitter accounts of the world- I cannot tell you how to tweet (the last thousand words to the contrary, I know). What I can tell you is what we see and how it makes us feel. Oversimplification, reduction, and hiding behind "It was just a joke, omg" are weak covers that do nothing to disguise a lack of content. Not to say everything everyone says on education twitter needs to have some deeper meaning. Imma tweet about Star Trek and my kids and my band and music I like as much as I tweet about education. But my bio doesn't pretend that I'm anything other than that.


*The Mane Six ranking goes 1) Pinkie Pie 2) Rainbow Dash 3) Rarity 4) Twilight Sparkle 5) Fluttershy 6) Applejack. No I will not be taking questions about this except to say Rarity sometimes jumps to number two because she's secretly the funniest pony. and The Great and Powerful Trixie is the best re-occurring pony because the idea of a stage magician in a world with actual magic is freaking hilarious and Trixie calls herself "The Great and Powerful Trixie" in the third person and I want to adopt that.

If you like this post and the other posts on this blog you should know I’ve written three books about teaching- He’s the Weird Teacher, THE Teaching Text (You’re Welcome), and A Classroom Of One. I’ve also written one novel- The Unforgiving Road. You should check them out, I’m even better in long form. I’m also on the tweets @TheWeirdTeacher.
Posted by The Weird Teacher at 10:22 PM