I first visited Discworld in Small Gods. I had heard about this Pratchett guy because he and some guy named Neil Gaiman, who I also didn't know past this one book, wrote a book I liked called Good Omens.

Small Gods was a revelation. People talk about how pieces of art change their lives so often it's a cliche. Small Gods changed my life. I couldn't believe you could be this smart and this funny and this deep all at the same time while telling an engaging story with fleshed out characters. It was too much. It was impossible. It was perfect.

Because Terry Pratchett was a genius.

We lost Terry Pratchett today. I had no idea how much he meant to me until I saw the news. Someone had tweeted something about when they first started reading his books. That's never a good sign. Google confirmed it. He'd died at the age of 66 from the Alzheimer's which had been embuggering him.

I knew about the Alzheimer's, of course. It seemed like a nightmare. A writer of his skill and wit losing his ability to think like that?

I cried when I saw the news. I don't mean that metaphorically. I didn't feel like crying. I mean my kids were working away on a reading project and I saw the news and I turned away from them because tears sprang to my eyes unbidden. I collected myself enough to keep teaching and helping, but the black cloud was suffocating. I had no idea I would feel like this. Sure, I loved his work, but crying? The way the people who took over his twitter account told his followers was both perfect and heart-breaking. 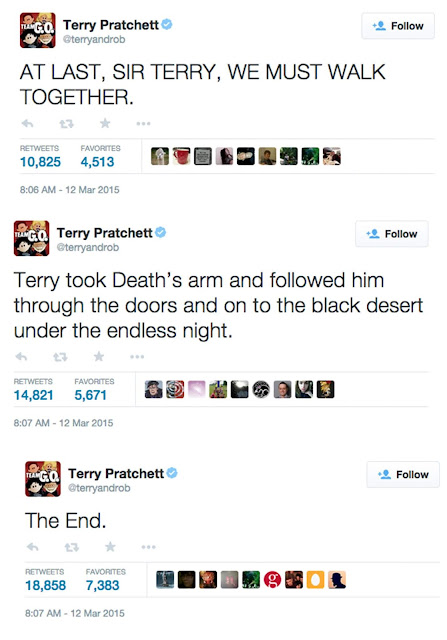 Anyone who has ever visited Discworld knows only one character who speaks in all caps. Death. I still can't look at this series of tweets without crying.

Discworld was a vacation spot. Any time I had a hard group of days, any time I read a really difficult book, I'd turn to Pratchett and Discworld. He was so good that I could pick a book at random and be happy, if not utterly in love, with it.

Reading Terry Pratchett sometimes made me mad. Mad that he was so brilliant. Selfishly mad that he could be so great at this and make it seem so effortless. I know it wasn't, writing never is, but it feels like that. It feels effortless. The satire of Discworld is sharp and cuts deeply. The humor is often laugh out loud funny and made me shake my head at the absurd connections he'd make that made perfect sense in his world.

He comforted me when I needed it. He constantly inspired me. He was more deeply important to me than I recognized.

My favorite Pratchett books are Small Gods and Night Watch. Night Watch builds the background my favorite Pratchett character, Sam Vimes and is an examination of the choices we make and how they ripple. Commander Vimes (reluctant Duke of Ankh-Morpork) will never walk the streets anew, but I have so many tales of him walking those streets it feels selfish to want more.

That's the thing about losing an author, especially one as prolific as Sir Terry was. We have a record that we can always go back to. The well is deep and I haven't yet plumbed all the depths. Still, knowing that we'll never get more is painful.

It feels weird answering, "You ok?" with "Not really. One of my favorite authors died today." I've done that a bunch. It's hard to explain if you've never read him.

I took a few minutes today to talk about him to my class. I told them about him and my connection to him and tried to explain why I was so upset. I'm sure I rambled and went on too long but these things are hard to explain and harder still to explain to fourth graders. I left them with, "Find an author who you connect with so deeply that you feel you know them," or something like that. I wanted them to see what books could do. What authors could do.

I'm in the middle of an excellent book but tonight I'm stopping and revisiting Discworld in Small Gods. Brave the Librarian and find one of his books.
Posted by Unknown at 2:45 PM