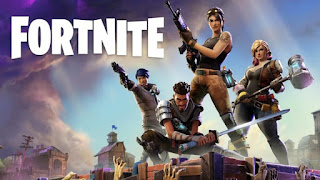 I never wrote a lesson for my students that incorporated Pokemon Go. I let my kids use fidget spinners in class but didn't build a math unit around them. When I was a Weird Student my teachers never brought Pogs into the classroom.

And I won't create a Fortnite Curriculum.

I see why teachers do this and before I go any farther let me make clear that if this stuff works for you then godspeed you black emperor. Students, classrooms, and teachers are too varied to throw out general rules for everywhere and to pretend to know what's good for everyone. I mean, unless you're a thought leader. Then that's basically your bread and butter.

Fortnite, for those of you reading this who somehow haven't heard your students talking about it, is a free-to-play video game where you raid, fight, build, and survive with and against other players. The fun part of the game, at least for my kids, comes from the massive multiplayer online aspect of it. This means that rather than play against NPCs (Non-Player Characters, game characters controlled by the computer), players play against other people. See- Massive Multiplayer Online. Which is great. I love video games and one of my favorite current games is Overwatch, a team-based shooter played with and against people all around the world. Fortnite has exploded in popularity recently because it's a "living, breathing world" according to The Verge's Nick Statt. It helps that kids can go home and play with their friends. I'm in no way against Fortnite.

I am not, however, a fan of teachers trying to bring this game into schools. There's a lot of reasons for this, but I can boil them down to three four.

Reason One- It's a Shooter
The core gameplay loop in Fortnite, like many video games, is shooting. Video games are all, at their hearts, about solving puzzles. How do I get this thing to that place? How can I get these bricks lined up in a way that makes them disappear? How can I get this obstacle out of my way? The answer many game devs have come up with, an answer that has created one of the most popular genres of video game ever, is "shoot the obstacle in the face."

There is nothing inherently wrong with shooters. Like I said, I play the hell out of Overwatch and that's all about shooting other players in the face better than they shoot you in the face. It's great fun. Players killing monsters, Nazis (could have grouped them under monsters), other players, plants, zombies is a thing that happens in video games. I don't think this makes us more violent as a society, that's pure nonsense that ignores that every other country in the world has access to the same games and doesn't have the problems we have (hint- the problem is actual, real guns).

"So Doug," you say. "You like shooters. You say they don't make us violent. I'm thinking you're first reason holds no water." Oh but it does, Hypothetical Reader. You see- I'm fine with those games at home. I have Feelings and Opinions about fifth graders playing jingoistic games like Call of Duty where they snipe people and there's a celebration of blood spray, but that's a parenting call not my call. I have problems with teachers taking a game where the gameplay loop is "shoot it in the face" and trying to make it work in schools. It feels tasteless to me. You know what schools need less of? Shooting. Speaking as someone who works in elementary school and so is ignorant of the reading habits of middle and high school, we're not even reading hyper-violent books. Coraline is probably as intense as my class gets, and while that has such delightful exchanges as "I swear on my mother's grave." "Does your mother even have a grave?" "Oh yes, I put her there myself. And when she tried to escape I put her back." it's still not advocating violence for problem solving (Yes, that's what Fortnite does. Haven't you been paying attention to the whole puzzle solving gameplay loop thing?). Let's keep shooters in any form out of schools.

Reason Two- It's Not Mine, It's Theirs
"Ok Doug," you say. "But I want to connect with my kids on their level. It helps buy-in when I use something they like." To respond in a way that The Kids would also understand, Hypothetical Reader, let me post a popular meme.

They know we're not cool. We're not supposed to be cool. I don't believe that this is what's meant by "connecting curriculum to the Real World".

This is not to say that I don't let my kids use their interests in class. Student choice is important to me so if they can fit what they love into an assignment in an organic way that makes sense then I'm totally for it. But notice- if they can fit it in. I'm not going out of my way to do it. Because it's not mine, it's theirs. I don't want to make it School. I'll teach them about critical thinking and bring up things they love within the context of a larger lesson and might use an example here or there, but I'm not making Pokemon Go or Fortnite or Fidget Spinners homework. I'm cool with kid stuff being kid stuff.

I still connect with my students through things that they like. I had a kid last year who loved Overwatch. Almost every day on the walk from the classroom to the buses he and I would chat about the game and new heroes and who was getting buffed or nerfed. I have a student this year who is all about My Little Pony, and at the beginning of the year I'd listen to her talk about it and nod along, but recently my Weirdlings got deeply into MLP and, because I watch what they watch, so have I. Also, My Little Pony: Friendship is Magic is a really funny, smart, well-written show with a deep, thought-out lore. Which means that now I can converse with her on an intelligent level about her interest. Not because I had a student who liked a thing so I went out and learned all about it so we could connect, but because it naturally came up in my life too. This leads me to my third point.

Reason Three- Way To Narrow Your Audience
Not all of my kids play Fortnite. Not all of my families can afford the systems needed for their child to play it. So by making it the center of an assignment I'd be highlighting an economic difference in my class, or at least parenting differences. Talking about differences is fine, building empathy is awesome, but an assignment that breaks my kids into groups that Know a Pop Culture Thing and groups that Don't creates an inequality in my room that doesn't need to be there. It was the same with Pokemon Go. Part of all those lessons needed to be "If you don't have a phone then find a friend who's parents can afford to get them one and tag along." Don't come at me with "kids today all have smart phones" because you're just showing how small your world is.

If I make Fortnite an assignment I've got to make sure everyone has background enough to understand the assignment, or I've got to create an assignment so shallow that everyone has access equally, which means I might as well have used something that lets everyone start on equal footing to begin with. While the game is hugely popular, that doesn't mean 32 out of my 32 kids play it or even know what it is. Heck, I've got kids who don't know anything about Star Wars and you literally can't find a more ubiquitous piece of pop culture in the world right now.

Student choice allows kids to use their interests in their own way, but that's not me creating an assignment around Fortnite. That's my kids finding a way to use what they like without having to convince the rest of the class that this thing is something they need to understand to learn today.

Reason Four- That's Not My Job
I'll be honest- I'm not at all sure the "I use this to engage kids" argument is worth the paper this blog is printed on (because it's not on paper at all, you see). We don't need to come to them with bells and whistles to make them care about math or reading or science. We can use their interests as peripheral tools, but pop culture as an engagement strategy is a crutch. A crutch that needs to be replaced constantly. All those Pokemon Go lessons from last year? Gone. Toss 'em. No one cares. All the Fortnite lessons? Gone. Total impermanence. Not to advocate that things shouldn't change, I doubt I've taught anything the same way twice in my entire career. But I try to build things like Lego constructions- there's the main block, and then I can add and subtract as needed. But if the main block is an effort to just be hip and with it then its worth is fleeting. Be interesting and engaging without being hip. I talk about Star Trek in my class All. The Time. And not one of those kids could care less about Star Trek because their parents are terrible (joking!). But I care, and I can use it to help them. When I do bring up Harry Potter or Doctor Who or some band or something in pop culture, it's not the center of anything. It's icing. If I want a lesson on Fortnite I'm not going to write it, I'm going to challenge a kid to write it.

At the end of the day, my job is not to teach my students about things they already love. I can teach them to think critically about what they love, but that's different than just using it because I know they identify with it. I'm not triggering their "Hey, I know that thing" reaction to get their eyes up and brains engaged. Because you know what my job really is? My job, our job, is to get kids to care about stuff they don't know. To get them to engage with stuff they don't care about. I don't read them novels they've already read, I read them novels I know they haven't. I don't play the music they love, I play music they might not be exposed to. I don't teach them things I already know they know, I teach them new, different things that will challenge them and push them in different directions.

We're in the business of expanding minds, of pushing and stretching. Using Fortnite or Pokemon Go or whatever is cool at the moment is a trick, it's shallow and easy. Sometimes that's fine. But creating whole lessons, whole projects around them? For so many reasons it's not the best way. It's not using the real world, it's pretending that what we have to teach and how we teach it isn't good enough.

I think maybe the only lesson I'd use Fortnite in directly is to teach my kids what a portmanteau is and then what a fortnight is, so that they could sound fancy with their parents. "Yes mother, for the last fortnight we have been learning to manipulate fractions. It has been splendid!"