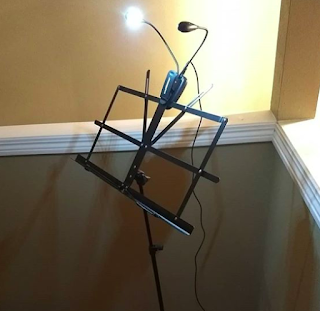 "The first thousand songs are the hardest."
- Aaron, my bass teacher

Back in February I decided to fulfill a lifelong wish. I'd always wanted to learn to play an instrument, but for reasons I go into in this post I never did. Since that post I've found a bass teacher and have been taking weekly lessons. Fun story about finding the bass teacher- I used the internet and found a bunch of people local to me, then asked the music teacher at my school if she knew anyone and she pointed me at one person specifically. I picked him, because my school's music teacher is awesome and knows her stuff, and I haven't regretted it for a second. People in my Building 1, Internet - 0.

While I didn't decide to learn the bass to become a better teacher, I did figure that the process would help me teach. I can't help it. I think, like a lot of us, things we do every day leak into the classroom. That I'm literally learning to do something only makes the connection more direct.

One of the big lessons that I'm taking away from learning to play the bass is the current demonization of repetition and possibly boredom-inducing practice. That's seen as a Very Bad Thing. Kids should be constantly engaged and interested and if they are bored that's our fault and should be fixed. It's the main argument against worksheets. Here's where I get to play in the area between extremes, which is where education should lay- I agree that boring our kids is bad. I agree that worksheets and similar repetition lessons aren't always ideal. BUT, I also think they are tools that can be used to great effect.

Some can say "learning to play bass isn't the same as learning to read". And they're wrong. I'm learning to read music. I'm teaching my body the motions that are required to perform. None of that happens on the first try. I'm upstairs every night working through things, playing the same bit over and over and over (and over and over and over) until I get it right. It's hard. I've never done this before so not only am I learning the technique, I'm also getting that technique into my head and hands so the next time something comes up I don't have to think about it. Like learning a new way to do math, or how to read, or write. The skill is new, and thus needs practice to be understood. But once it's understood it also needs practice to be done without thought, so that thought can be spent on something else, something that makes the base (bass) skill better. I am typing this, but I'm not thinking about typing it because I've practiced typing so much, so I can focus on the words. That only comes through repetition. Which can be boring, and is often frustrating. Stupid fingers not doing what I tell them to.

It's ok for my students to feel that way too. That's the productive struggle thing, but once you get through the productive struggle I think there's still more repetition to do. Now, I don't think mindless repetition is the way to go either. To go back to the typing example, I'd rather have my kids writing than on some typing website, but those typing websites have drills that will make them better typists, and will also be kinda boring. It's about balance.

When I'm learning bass out of my book, I'm doing a ton of drills. The book that I own, Electric Bass Method Vol 1, is great. But it's also almost all drill. Which is what I, as a new player, need. I need to see the pieces and parts. Practice them in small chunks.

But now that I'm moving along in my playing, I'm starting to learn songs. I finished Vol 1 of that methods book and before starting Vol 2 Aaron had me pick out three songs to learn (I chose London Calling, by The Clash, Walk This Way by Aerosmith, and Ace of Spades by Motorhead). Because if you learn enough songs you'll start to see how all those pieces come together. For teachers, this makes perfect sense. Learn the skill, practice the skill. Learn another skill. Practice that skill. Put those two skills together and practice. Eventually create a whole and practice that. Repeat. Even the way Aaron talks about learning bass makes sense to me. "There's only so many ways for notes to go. You listen to music, so you know when a song should go up or down or stop. You can predict that. Like watching a movie, 'Oh here's the part where they fight'. Learning songs will teach you to see that more clearly." This is teaching my kids to read, or do math. Sometimes it's boring.

"The first thousand songs are the hardest. After that the patterns get pretty clear." I love this. It's not really meant to be motivational, but it's also just hyperbolic enough to be funny while still making its point. That's a lot of songs. It's a lot of practice. The mountain is tall and every time you reach a summit it reveals yet another climb.

Part of my job in upper elementary is helping my kids make that first summit, while preparing them for the next climb. It’s getting them not through the first thousand songs, but maybe the first hundred or so. They know the notes, can read the music, and have the muscle control to play basically what they want, so now it’s all about finding new and creative ways to combine and use those skills. Which takes a lot of practice. Even Frank Zappa and Geddy Lee had to practice scales.

If you like this post and the other posts on this blog you should know I’ve written three books about teaching- He’s the Weird Teacher, THE Teaching Text (You’re Welcome), and the just released A Classroom Of One. I’ve also written one novel- The Unforgiving Road. You should check them out, I’m even better in long form. I’m also on the tweets @TheWeirdTeacher.
Posted by The Weird Teacher at 1:46 PM