One of Those Years 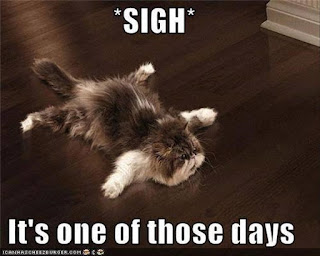 You know what's special about teaching that I don't think translates to very many other jobs?

Like, you don't often realize it right away. Maybe it was just a weird September, some years start weird. And October felt a little funny. November is always strange. And December doesn't count, December is always screwed up. But suddenly it's the end of January and things still haven't settled in? Oh...oh hell. It's one of those years, isn't it?

There can be a lot of reasons for One Of Those Years. Every once in a while you just get that certain mix of students, that specific chemical combination of personalities that makes everything harder than it needs to be. Not that they're bad kids, not that they're trying to make things harder, not that you're worse at teaching, but you just ended up with the least efficient possible combination of humans in one room and no amount of relationship building and class meetings can smooth the jagged edges.

Sometimes it's a new admin. Or a new team member. Or a new program. Or, for the lucky amongst us, a combination of the three. Yay, so much newness all at once, this will be fun to juggle.

I recently realized that this year is probably going to be One Of Those Years. I'm fortunate. I haven't had too many in my fifteen years. Two real bad ones. The first, which I wrote about in my first book, was when I taught sixth grade in Hawaii. My third year of teaching. I had the worst team in the world. The meanest women I've ever met. Impossible to work with. I was in my principal's office in October asking to be moved out of the grade. I stopped eating lunch with them in October and spent the rest of the year eating alone in my room. I sheltered my students from them as much as possible. Example- I was teaching my kids the meaning of "suspense" one day and one girl raised her hand. "Oh, so it's that feeling when we have to go to Mrs. XXX's room. We know that someone is going to get in trouble, but we don't know who and we don't know why." That was One Of Those Years.

The second one was because my school had just hired a brand new vice principal. It was her first year as an admin and we...did not get along. I take responsibility too, I do not handle having my chain yanked well and I know better than to go toe to toe with an administrator. But right away I was shut down by her in a staff meeting in front of everyone in a brutal, rude way, and that set the tone. She decided she didn't like the way my classroom ran and to enforce every inch of the district guidelines, which included expecting weekly lesson plans on her desk every Monday morning. She claimed she was doing it for all "new" teachers. (I wasn't new, it was my ninth year, but my second in the district, but she treated me like it was my second period.) I checked. It was just me. So I did the responsible, respectful thing of testing her, because I didn't trust that she actually cared. I wrote one master weekly lesson plan out, made a bunch of copies, changed the dates, and submitted the same thing to her over and over. She never called me on it. She did end up threatening me with a poor review when she found out I was looking for another job if someone called her. Like I would tell a job to call her. But like I said, I wasn't making it any easier on myself. I made the year harder for myself and it sucked the whole time.

The constant in both of those years was I had great kids. Amazing kids. Well, one scary kid in the sixth grade that eventually got moved out, but other than that it was amazing. I learned a ton with them in those two years.

I narrowly avoided One Of Those Years a few years ago with a student teacher. Rough mix of kids. We had a hard time, but we figured it out right at the end. We had to rework everything but we did it. Student Teacher Ms Miller (now Ms Miller in her own classroom for a few years) helped save that year. I couldn't have asked for a better student teacher. It was One Of Those Three Quarters Of A Year.

This year, I think, is OoTY. Not because of my kids. I have a reasonably size group of nutty, weird, funny, chatty, great kids. I always have a bunch of nutty, chatty, weird, funny kids. Every single year. What are the odds? The kids claim I make them weird, but I doubt that very much.

But here's what has happened since the start of the year-


Not to mention all the normal things I'm involved in like I'm on a STEAM leadership team and I'm part of an awesome Community Partnership thing that had my students building benches last year and is dreaming even bigger this year, and I'm heading up the MakerFaire committee. I'm not complaining, I love this stuff and it's important to me. But it's a lot.

I've noticed that I just feel off this year. I still don't have my feet under me and it's basically February, which probably means I'm not going to get them under me. My class is great, my kids are working hard. We've done cool things and I'm doing my job well (except the last three weeks which were a garbage fire of no one's doing). But it's just not right.

I'm lucky too because my grade level team is killer. I couldn't be more lucky with the two people I share fourth grade with, and the fifth grade team is awesome too. I'm close with one of the fifth grade teachers, he's been a partner in crime and kindred spirit since my first year at the school and we make each other better. These people are saving me while I also battle that wonderful teacher insecurity of I Can't Let Them Down. Because it's not enough to put pressure on yourself to not let your kids down, someone of us are lucky enough to work with teachers we feel the same way about. The jerks. Gotta be all helpful and friendly and good at their jobs. (I should note that if they sucked like the sixth grade team a few paragraphs above did I'd still be be putting pressure on myself, but it would be the much less healthy "I'll show you" kind. Because spite and anger are fuels too, kids!)

I'm going to keep trying. You can't give up on a One Of Those Years or it'll sweep you away completely, but it's not healthy to not see it for what it is. Teaching is a hard freaking job. No amount of sunshine and rainbows, be positive and cheerleading keynotes, books, quotes, memes, and pablum will change that or make it better. I'll find my way and laugh doing it because, like Jimmy Buffett says, "if we weren't all crazy we'd all go insane."*

*I've seen Jimmy a few times live, he puts on a great show. Especially when you see him outdoors in Hawaii and you can smell the ocean (and a few other things) during the set. But you have never seeeeeeen so many drunk white people dancing badly.


If you like this post and the other posts on this blog you should know I’ve written three books about teaching- He’s the Weird Teacher, THE Teaching Text (You’re Welcome), and A Classroom Of One. I’ve also written one novel- The Unforgiving Road. You should check them out, I’m even better in long form. I’m also on the tweets @TheWeirdTeacher.
Posted by The Weird Teacher at 11:09 PM