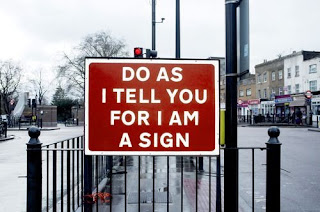 How many rules do students really need at recess?

Let's leave the classroom aside for this post. In the classroom I feel students need no more than four rules- Be Respectful, Be Safe, Be Responsible, Make Good Choices (provided the kids build that list themselves), and that those four rules can all be boiled down to the simple, easy to remember catch-all- Be Cool. That's The Rule in my room. Do the students know I came up with the idea not because of Fonzie but because of Jules, Honey Bunny, and Ringo? No, and they don't need to until they finally get to that movie and wonder, just for a moment, why "Be cool" sounds so familiar.

I can only speak for my current school and the ones I've worked at in the past when I say often there are way too many rules at recess. And, as so often happens when you have too many rules, they conflict and don't hold up to scrutiny or questions.

Here's the most egregious example, and it's from my current school. I have no problem admitting it's from my school because I didn't make it up, my students know I think it's ridiculous (I'll get to that), and I've brought it up a few times.

Imma leave that right there for just a second. I'll let you pick your jaw up from your keyboard or the bathroom floor (ew, come on) or wherever you're sitting and reading this. I'll wait as you go back and read it again. I'll look you dead in the eye and shake my head when you silently ask me if there's a punchline coming. Nope, dear reader. There is not. This, as much as it sounds like a joke, is not one.

The kids at my school cannot play Tag at recess. This is a school rule. It's been there longer than I have. They can play two-hand touch football. "What's the difference!?!" I hear you ask. Friends, I have seen students ask that very same question. They've asked it honestly, with no trace of Gotcha or disrespect. They've asked it because their teacher, me included but not only, encourages them to question rules that are confusing. This is part of being a good citizen.

The reason? The reason that I heard today makes as little sense as the rule. "Because there's a ball." That's basically it. The recess person in question went on to try and justify it with "There's lots of things out here that we're worried students could run into." No, this does not make it better nor does it justify No Tag But Yes Football.

How many rules are there like this out there? How many don't make any sense at all?

Now, before I start really hammering on those who run recess duty I will make acknowledgements- There's a lot of freaking kids out there at any one time and not very many of them. That can be overwhelming, I'm sure. And they honestly don't want kids to get hurt. Be honest though, this is an excuse that gets used to make their jobs easier. I get it. More rules make your job easier. And we've all heard the story about the one time one kid was playing on the monkey bars unsafely and slipped and fell and broke both arms. We know that happened. But one event does not an unsafe play area make. You can't use one story that happened forever ago as justification for rules that don't actually make sense or keep anyone safer. I mean, this is recess, not the airport. (This is where I rant at you for a solid five minutes about how unbelievably stupid and insulting it is that we still or ever had to take our shoes off at airport security.)

But it's recess. We're literally preventing running at recess unless the kids are playing one specific game? I'll be honest, I've always been annoyed by this but right now, this moment, as I type this, it's really setting in and getting under my skin. I've not spent an extended period of time rationalizing it, I've just always heard it, been annoyed, and then moved on to more important things. But holy crap the more I think about this one rule the madder I get. They have to play two-hand touch football to play a Tag-like game? Road apples! I'm going in to my administrator tomorrow morning and having another word about it. And I think it'll go better than the last time because my current admin is a sub, my former one having just, sadly, been promoted.

Back to the wider topic at hand- Does recess need specific rules or can the general school rules be applied to recess as well and leave it at that? You probably need some game/equipment-specific rules. Tetherball lasts x rounds and then the next person comes in. You can swing on the swings y times if there's a line of kids waiting. Something something handball something.

I'm inclined to proclaim loudly and overly-broadly that students should be trusted more and given less rules during their free time. They get ten minutes and then another ten or twenty after lunch. Let 'em run. Let 'em get hurt. Let 'em do the learning on their own. Let 'em build their own rules for recess. It works wonders in the classroom. I know it'll be harder with the whole school. Maybe students could elect a safety committee. Kids choose a group of kids who come up with reasonable recess rules as a group, vote on them,, run then by the adults, make adjustments as needed, and Robert is your mom's brother. I like this idea too and I'm running it by a partner in crime tomorrow morning first thing. This is part of the reason I blog about topics like this- I need to think out loud and being in the car isn't really helping me think right now.

What rules do you have at recess at your school?
Posted by The Weird Teacher at 10:35 PM